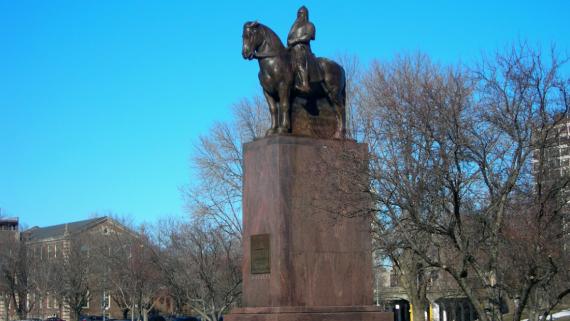 Center of the Midway and east of S. Blackstone Avenue, west of Metra tracks

Czechoslovak statesman and scholar Thomas Garrigue Masaryk (1850–1937) led his country to independence during World War I and went on to serve as the first President of Czechoslovakia from 1918 to 1935. Earlier in his life, Masaryk spent time in the United States, particularly as a visiting professor of Slavic Studies at the University of Chicago. Soon after he died in 1937, Chicagoans of Czech descent began raising funds for a monument in Masaryk’s honor.

The donors commissioned renowned Czech sculptor Albin Polásek (1879–1965) who had immigrated to the United States when he was twenty-two-years-old. After training at the Pennsylvania Academy of Fine Arts, Polásek won the prestigious Prix de Rome in 1910, which allowed him to study at the American Academy of Art in Rome. He returned to America, and after several years in New York, Polásek moved to Chicago to serve as Chairman of the Sculpture Department at the School of the Art Institute. Although he began working on the Thomas Garrigue Masaryk Monument in 1941, the piece was not cast until 1949 due to wartime delays. The Chicago Park District unveiled and officially dedicated the monument on May 29, 1955.

Rather than presenting a representational depiction of Masaryk, Polásek created a symbolic sculpture of an enormous Blanik knight on horseback. According to legend, a band of such knights slept quietly in the heart of the Blanik Mountains of Bohemia, awaking when their nation was under attack. In the face of such danger, the knights were led by St. Wenceslaus to save their people from the oppressor. This legend was considered a fitting metaphor for Masaryk’s rise to power to liberate his country and help it become a democratic nation.

The monument’s plaque explains: “Thus cast in bronze the Blanik knight is but a monumental symbol of Thomas G. Masaryk’s eternally valid ideals of freedom, democracy, and humanity.” In the early 1990s, the Chicago Park District, the State of Illinois, and the Czechoslovakian National Congress jointly funded an extensive conservation of the monument.