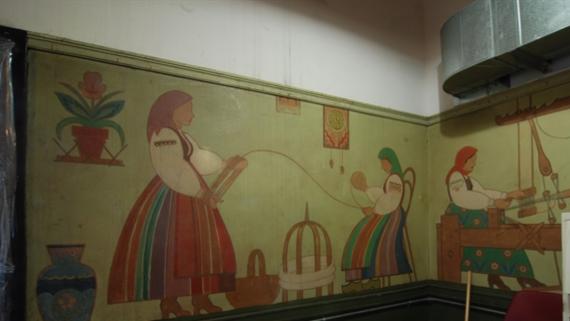 Third-floor tower of the field house

This mural of Polish peasants is located in the third floor tower of Pulaski Park’s field house. Constructed in 1914, the building was designed by architect William Carbys Zimmerman in an eclectic style with half-timbering, open loggias, and a tall tower. Historically, the park and field house were part of the West Chicago Park Commission.

Two decades later, the Great Depression spurred the consolidation of the city’s individual park commissions into the Chicago Park District. At that time, the densely populated West Town neighborhood surrounding Pulaski Park had a large concentration of Polish immigrants. Community members made good use of the park, which then included public bathing facilities, a branch library, gymnasiums, an auditorium, and many club rooms. The third floor tower room was then used for arts and crafts classes and clubs.

During the late 1930s, the Park District received substantial funding through President Theodore Roosevelt’s New Deal, not only to make improvements to park buildings and landscapes but also to provide a broad array of programs and activities in the parks. In a 1936 report describing the programming philosophies of the newly formed Chicago Park District, staff member Alice Beyer wrote that the arts and crafts division was organized to provide “recreation by choice.” She explained that neighborhood groups or clubs could choose from a generous list of arts and crafts activities—basketry, crocheting, doll and toy-making, knitting, lantern making, needlepoint, metalcrafts, and quilting—which could be practiced under “the guidance of a skilled leader.”

The March 1939 issue of the Chicago Park District’s employee newsletter reported that Pulaski Park’s arts and crafts room had recently been spruced up with new sewing machines, shelving, mirrors, cabinets, and the “Polish peasant mural.” Painted directly on the wall, the mural extends across several sides of the room. It depicts Polish women, dressed in brightly colored traditional folk garments, engaged in activities related to crafts. Two women are winding a skein yarn together. Another is working at a spinning wheel. One is weaving at a large loom, and another is making baskets. It is most likely that an arts and crafts instructor painted the mural, featuring a theme that directly related to the park patrons who gathered in the room to sew and make other handicrafts.

Today the third floor tower room is used as an office for Free Street Theater, a non-profit organization that provides programming through the Chicago Park District’s Arts Partners in Residence Program.

Gallery:
Pulaski Park: Tower Room Mural
Date Posted: 7/28/2015 Hidden in the tower room at the upper story, the mural was painted in the 1930s, when the Park…
Advertisement