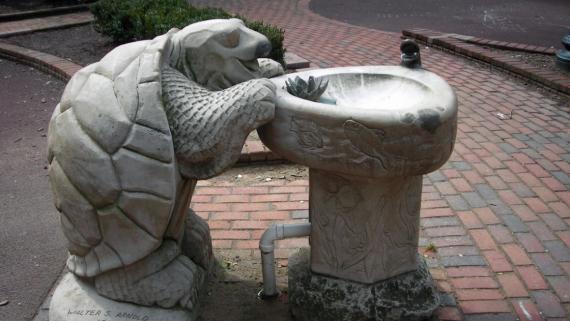 In 1991, the Chicago Park District conducted a major rehabilitation project for Goudy Square that included a new playground. Architect Julie Gross, then a member of the Park District’s engineering department, designed the site to fit well with its surrounding Gold Coast Historic District. She enclosed the park with custom-designed ornamental fencing that was inspired by the many beautiful historic iron picket fences which still exist in the neighborhood.

The Chicago Park District commissioned sculptor Walter S. Arnold to create the park’s Turtle Fountain. A large carved limestone turtle leans against the drinking fountain which has incised carvings of fish along the outer basin. Inside the basin, a bronze fish and frog spout water near a bronze lotus flower.

Walter S. Arnold began as an apprentice to a stone carver in Pietrasanta, Italy and went on to work at the National Cathedral in Washington D.C. He returned to Chicago to open his own studio in 1985 and currently lives and works in the Fox River Valley area. He is the author of a book entitled Staglieno: The Art of the Marble Cutter, published in 2009.

In 2013, the Chicago Park District rehabilitated the park and playground. The Turtle Fountain was retained as part of the project.

Gallery:
Goudy Square Park: Turtle Fountain
Date Posted: 7/22/2015 The Turtle Fountain is made primarliy of Indiana Limestone, but it does have some bronze elements,…
Advertisement