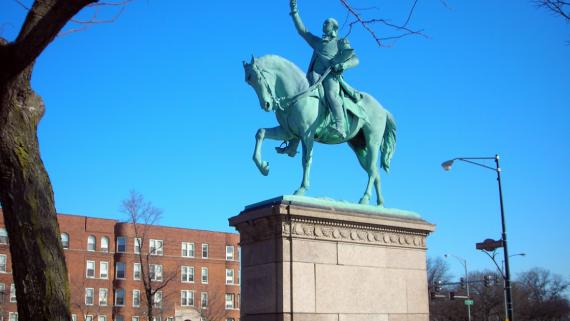 This heroic statue depicts President George Washington (1732–1799) during the Revolutionary War period when he served as General and Commander in Chief of the Continental Army. The Daughters of the American Revolution commissioned renowned sculptors Daniel Chester French and Edward C. Potter to create the original version of this monument as a gift to the French government. It was unveiled at the Place d’Iéna in Paris on July 3, 1900. Two years later, a committee of public spirited Chicagoans asked for permission to install a replica of the bronze equestrian figure and granite base in Washington Park.

The donors to Chicago's George Washington Monument included such prominent businessman and philanthropists as Benjamin F. Ferguson, Clarence Buckingham, Charles Hutchinson and Edward Butler, as well as the artist Daniel Chester French, himself. Collectively, they gave approximately $26,000 for the project. In 1904, the sculpture was erected at the entrance of Washington Park at Grand Boulevard (now known as Martin Luther King Jr. Drive). The South Park Commissioners officially named the statue’s site as Washington Monument Square.

Daniel Chester French (1850–1931) was one of America’s most celebrated early twentieth century artists. His most famous sculptures include the seated Abraham Lincoln at the Lincoln Memorial in Washington DC, the Minute Man in Concord, Massachusetts and Chicago’s Statue of the Republic. French often collaborated with Edward Clark Potter (1857–1923), an artist who specialized in equestrian and animal sculptures. Together the two created the General Ulysses S. Grant Monument in Philadelphia’s Fairmount Park and the John Hooker statue at the Massachusetts Statehouse. The two sculptors also worked together on the Statues of Plenty for the World’s Columbian Exposition of 1893. Smaller bronze versions of these sculptures, which are also known as World's Fair Bulls with Maidens were later installed in Garfield Park.