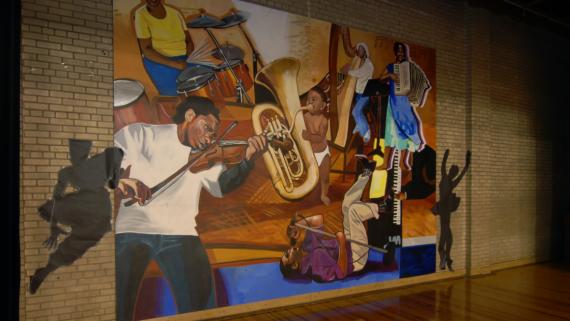 The artist Damon Lamar Reed created this large mural through the support of After School Matters. The artwork is painted on an expansive, twelve-by-sixteen-foot panel that decorates the back wall of the gymnasium stage in the Washington Park field house. Vibrant and engaging, the mural provides a lively backdrop for the many plays and performances held in the gymnasium.

Entitled Peculiar People, the mural depicts a variety of individuals playing musical instruments. At the far left, a man focuses intently on his violin. Behind him, a woman plays the drums, her drumstick captured in mid-motion. Other instruments portrayed in the composition include a harp, an accordion, and a piano.

The most peculiar aspect of the mural is the young toddler who plays a giant tuba. Illustrated at the very center of the composition, the child ably lifts the instrument—which is larger than he is—to his mouth. The strangeness of this image is heightened by the fact that the child wears only a diaper. In fact, although this group of people appears to be making music together, other sartorial details signal a more disjointed scene. Some of the figures wear more casual outfits; others, such as the pianist, are formally dressed.

Shifts in perspective also fracture the composition’s traditional sense of space. The singer has fallen flat on his back, grasping the microphone with his legs flailing into the air. The pianist is viewed from overhead, his left hand stretched out over the keys. These discontinuities add to the peculiarity of this aptly titled artwork, which represents a surreal performance by many individuals who are truly expressing themselves.

Location: Back wall of gymnasium stage