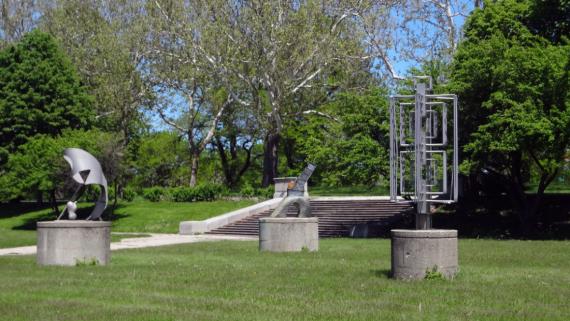 The DuSable Museum of African American History commissioned several artworks to honor Jean Baptist Point DuSable, a Haitian immigrant and Chicago’s first non-indigenous settler. Located in the sunken garden just north of the museum, the sculptures were dedicated on November 22, 1978. Among them was a bronze semi-abstract figure of a man sculpted by Ramon Price (1930 –2000), Mayor Harold Washington’s half-brother and long-time chief curator of the DuSable Museum. Unfortunately, the six-foot tall sculpture was stolen and never recovered, despite an FBI investigation.

Only four of the original sculptures remain today. The westernmost piece, a seven-foot-tall abstract work in bronze and copper by Geraldine McCullough (1922– 2008), embraces Chicago’s dynamic presence relating back to its origins during DuSable’s day. Southeast of this, Jill N. Parker’s nine-foot-tall stainless steel sculpture symbolizes three periods of local history— the founding of Chicago, the Great Fire of 1871, and the present-day city. A series of stainless steel bars connect these three eras in different places, suggesting the transient influences on Chicago — from DuSable himself, to the ethnic groups of the city, to more abstract notions of growth and change.

At the northeast side of the garden, a six-foot-tall aluminum and stainless steel abstract sculpture, represents the birth and development of Chicago. Lawrence E. Taylor (b. 1938) produced this artwork. In high school, Taylor was inspired by his art teacher Dr. Margaret Burroughs (1915 – 2010) who later founded the DuSable Museum. Taylor went on to study at the Art Institute of Chicago.

The last is the most figural of all of the remaining sculptures: Ausbra Ford’s (b. 1935) appropriately-titled The Spirit of DuSable. This nearly nine-foot-tall aluminum figure is meant to represent DuSable as well as the Chicago’s diverse population and the opportunities afforded to people from all walks here.