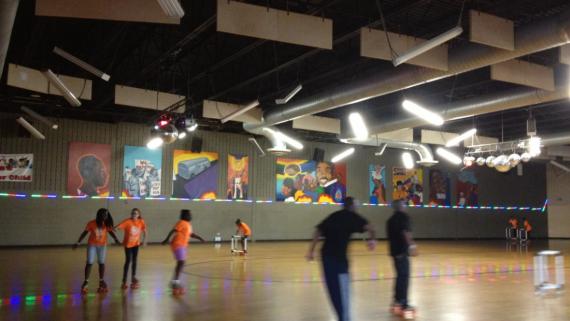 In 2004, soon after the Chicago Park District renamed Hawthorne Park for clergyman, activist, and civil rights leader Dr. Martin Luther King, Jr. (1929–1968), Mayor Richard M. Daley dedicated the park’s newly constructed family entertainment center. The facility includes a roller rink, bowling alley, and other spaces for recreational activities. At the dedication ceremony, Daley expressed hope that parents would “bring their children to this park and talk to them about the positive impact Dr. King had and continues to have.”

To honor the park’s namesake, the Chicago Park District, Gallery 37, and the Chicago Public Art Group commissioned artists Damon Lamar Reed and Juan Carlos Perez to create an artwork for an interior wall above the roller rink. Reed and Perez worked with a group of twelve teenagers to design and produce the multipanel mural.

Entitled We March, We Dance, We Sing for Freedom, the mural is inspired by the life of Dr. King and his fight for equality. Several of the panels depict moments in civil rights history, such as a freedom march with signs that read "I Am a Man" or "Jobs for All." A giant silver bus is portrayed driving off into an orange sky, recalling the famous Freedom Riders, who protested segregation laws by riding public buses throughout the South.

The large center panel depicts an image of King’s smiling face. To his right, a man wears a t-shirt that portrays a figure behind bars. The figure’s skin color is a hybrid of brown and beige, perhaps indicating that imprisonment knows no color. Other details promote signs of peace, including a hand releasing a white dove, and a woman flying a white kite.

A few of the panels appear to illustrate more modern scenes. At the far right, a teenager is portrayed wearing headphones. Near the center, a seventies dance club includes a glittering disco ball and a man striking a pose. On the left, a young man scratches a record on a turntable, and a break-dancer twirls to the beat of a boom box. These snippets in time—all revolving around dance and music—symbolize freedom of expression. Prominently displayed above the roller rink, We March, We Dance, We Sing for Freedom is a reminder to all who enjoy the facility of the sacrifices that have been made for civil rights.

We March, We Dance, We Sing for Freedom

We March, We Dance, We Sing for Freedom