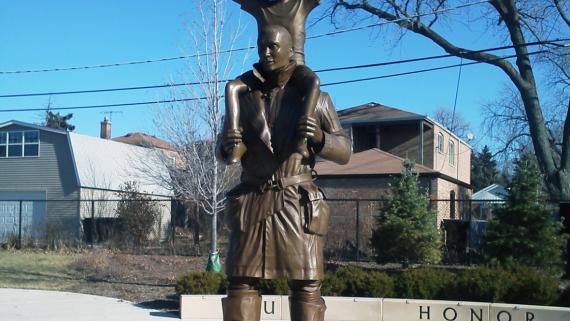 After the initial completion of King Lockhart Park in 2012, community members rallied for additional sculptural elements that would honor fallen firefighters. Using funds from the area's Tax Increment Financing district and donations from community residents, the Chicago Park District added two new feature to the park's design in 2014. These include an archway composed of a sculptural feature representing crossed ladders. In traditional funerals for firefighters, two firetrucks park at the entrance of the cemetery with extended crossed ladders, creating a gateway for the funeral procession.

In King Lockhart Park, the crossed ladder element leads to a sculputure of a firefighter carrying a child on his shoulders. Marshall Svendsen, who had produced the park's bronze boots and helmets also created this figurative sculpture. The artist provided a very accurate depiction of a Chicago firefighter's uniform. Rather than portraying the firefighter saving a child, this sculpture presents the figures in a joyous pose.