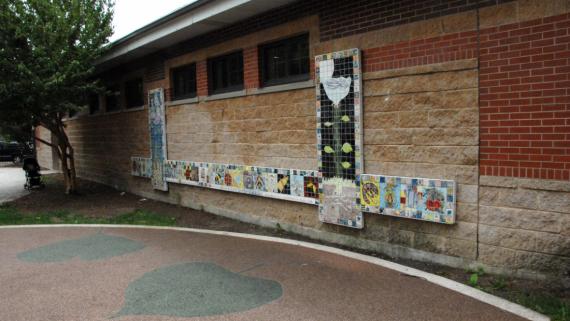 This playful tile mosaic is located on the exterior north wall of the Wicker Park field house. The Wicker Park Advisory Council sponsored its creation through the Children’s Mural Tile Project. The first stage of the project began in 2005 under the leadership of arts advocate and WBEZ producer Kathe Telingator. That summer a group of twenty-five local children worked together to paint small tiles with ceramic glazes.

In 2006, the council hired local artist Carol Tarnoff to organize a final design that incorporated the tiles on panels that were installed on the exterior architecture of the field house. The finished mosaic comprises a wide horizontal band bisected by two perpendicular panels. The original hand-painted tiles were used to create a thin border around the entire mosaic. The area within the borders comprises twenty-four smaller scenes (on the horizontal axis), and two larger images (on the vertical panels). Twenty-five children from the Wicker Park Garden Club’s Park Kids Grow Art and Garden Class created and refined the designs for the small scenes. The depictions include various horticultural motifs, such as insects, plants, and abstract botanic scenarios. The children also experimented with various color palettes to create images that had a strong impact on the wall.

Additionally, each child created designs for the two vertical panels. The children then voted for their two favorite images, based on design, content, and impact the images would have on visitors to the park. The winning designs are unique and imaginative: on the right, a night-blooming flower stretches up toward the moon; on the left, an underwater scene includes seaweed, reeds, and abstract floating creatures. The whole group of students painted the two vertical panels under the direction of the two children who designed them. The final tiles were then fired and assembled by Tarnoff. The wall was unveiled to the public during the 2006 Around the Coyote Fall Festival, a neighborhood art fair and organization that occurred annually until 2010.