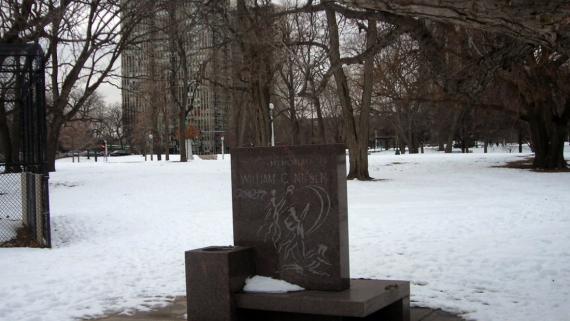 When the Old Timers’ Baseball Association dedicated this memorial to William C. Niesen in 1955, dozens of baseball greats attended the Lincoln Park ceremony, including Rogers Hornsby, Ray Schalk, Red Faber, and Pants Rowland. The group donated the granite monument, which includes a drinking fountain, and is appropriately sited next to ball fields that the Chicago Park District officially named in Niesen’s honor.

William C. “Billy” Neisen (1873–1953) played an important role in Chicago’s baseball history. In 1900, he managed the Gunthers, a famous semi-professional team whose home field was at Clark St. and Leland Ave., the present site of Chase Park. At the time, there were more than a dozen semi-pro teams in Chicago and Niesen soon became president of the Semi-Professional Baseball organization. He went on to serve as president of the Old Timers’ Baseball Association. Throughout his life, Niesen had several jobs. He owned a saloon, worked at race tracks, and was briefly Superintendent of the Lincoln Park Commission. His love of and involvement in baseball remained a constant throughout his life. Niesen wrote, “Baseball is a great common ground on which bartenders and bishops, clergymen and bosses, bankers and laborers meet with true equality and understanding. It is the avenue of escape for thousands of boys born into the dreary environment of poverty. The game must go on!”