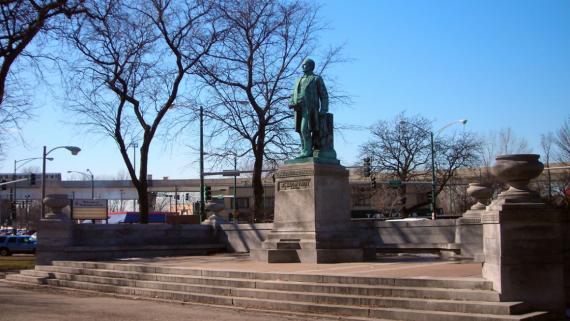 Shortly after the 1901 assassination of President William McKinley at the Panama-American Exposition in Buffalo, New York, Daniel Crilly, a member of the South Park Board of Commissioners, began planning a memorial to the martyred statesman. William McKinley (1843–1901), once a congressman and governor of Ohio, was in his second term as U.S. President at the time his death. Although the South Park Commissioners had immediately named a new park in McKinley’s honor, Crilly believed it important to also memorialize the 25th President of the United States in bronze.

To commission the monument, Crilly organized a committee of thirty-five prominent Chicagoans including department store magnate Marshall Field and Charles Dawes, a banker who went on to become a U.S. vice president. As part of the fund-raising effort, the South Park Commissioners agreed to melt down an old, universally disliked, bronze statue of Christopher Columbus which had been located in Grant Park. By reusing the bronze, the cost of the new sculpture was reduced by $2,500.

Sculptor Charles J. Mulligan (1866–1916) depicted McKinley with one hand on a desk and the other holding the pages of a famous speech he made to Congress in 1890 advocating the Tariff Act. Mulligan’s bronze figure stands on a pedestal that is located in the center of an elegant granite exedra. Chicago architects Pond & Pond designed the exedra, which has built-in benches, as well as an urn mounted on each of its four corners.

More than 5,000 people attended the dedication of the William McKinley Memorial on July 4, 1905. At the ceremony, Illinois Governor Charles S. Deneen stated that, “There is something uplifting in an environment of the natural beauties of grass and trees and flowers. There is also an additional power for good in the blending of historical and artistic impressions with which noble statuary affects us. In the case of our beloved martyred president William McKinley, it is not difficult to recall something of the great part he played in the history of our country, and of the world, and of the tragedy which brought to a close a life so rich in promise.”