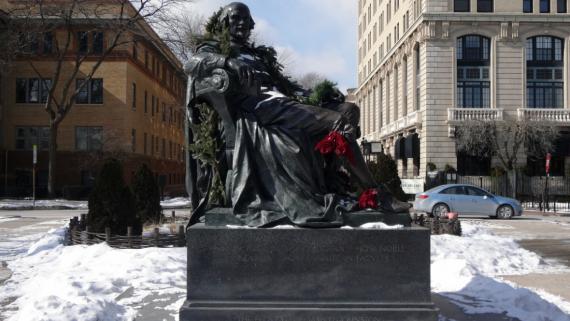 When Samuel Johnston, a successful north side businessman, died in 1886, he left a sizeable gift in his will for several charities as well as money for a memorial to William Shakespeare in Lincoln Park. A competition was held to select a sculptor. The winner was a Columbia University graduate, William Ordway Partridge (1861–1930), who had studied sculpture in France and Italy after a short stint as an actor.

This commission presented a unique challenge for Partridge since the only known portraits of William Shakespeare (1564–1616) had been done after the death of the famous English playwright and poet. Partridge made an intensive study of Shakespeare and life in Elizabethan England. He visited Stratford and London, reviewed dozens of existing artworks, and examined a death mask that was then believed to have been authentic. Partridge also consulted with Shakespearean actors including Henry Irving and his costumer, Seymour Lucas, who helped him portray the world-renowned literary figure in authentic period clothing.

Partridge displayed a plaster model of the William Shakespeare Monument at the World’s Columbian Exposition of 1893. He had the work cast in bronze in Paris and shipped to Chicago. The donor’s grandniece, Miss Cornelia Williams, unveiled the sculpture on April 23, 1894, the supposed anniversary of both Shakespeare’s birth and death.

At the dedication ceremony, Partridge said: “Shakespeare needs nothing of bronze. His monument is England, America, and the whole of Saxondom. He placed us upon a pedestal, but one cannot place him on one, for he belongs among the people whom he so dearly loved.” The artist’s remarks offer insight into the sculpture’s unusually low pedestal, which provides exceptional visual and physical access to the artwork.