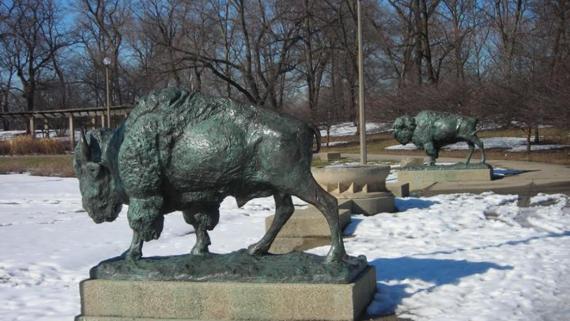 Located at the east entrance to formal garden, west of N. Humboldt Drive and north of W. Division Street

Edward Kemeys (1843–1907) first produced massive plaster versions of this pair of sculptural bison for the 1893 World’s Columbian Exposition in Jackson Park. Kemeys, who also sculpted the Lions in front of the Art Institute of Chicago, was famous for depicting wild animals as they might have appeared in their natural settings. Kemey's pair of enormous sculptural bison stood in front of the Stock Exhibit of the World's Fair. Although the two figures were quite similar to each other, they were not exactly identical. The male figure, “Prairie King,” is posed looking out, while the female, “Sound of the Whoop,” has her head lowered as if grazing or listening for danger.

In 1909 when Jens Jensen, the West Park Commission’s General Superintendent and Chief Landscape Architect, launched an outdoor art exhibition in Garfield Park, he placed smaller, life-sized plaster versions of the World’s Fair Bison at the entrance to that park’s formal garden facing S. Hamlin Boulevard. These versions of the sculptures were likely maquettes that had been used as studies by the artist in preparation for the World's Fair. Similarly, a pair of World's Fair Bulls with Maidens, by artists Daniel Chester French and Edward C. Potter, had been exhibited the previous year in Humboldt Park for the 1908 outdoor art exhibit.

The bronze World’s Fair Bison remained in Garfield Park for only a few years. Photographs show that by the summer of 1915, they had been moved from Garfield Park to their current setting flanking entrance to Humboldt Park’s formal garden. At that time, the World's Fair Bulls with Maidens, which had occupied this Humboldt site since 1908, were moved to entrance of the Garfield Park garden. Although there is no documentation to explain why the sculptural pairs were switched, it is clear that the Bison were consciously placed facing into the garden with their backs to the street, in the same way that the Bulls with Maidens had previously been positioned. Jensen clearly sited the artworks this way so they could be viewed from within the garden rather than from the street.