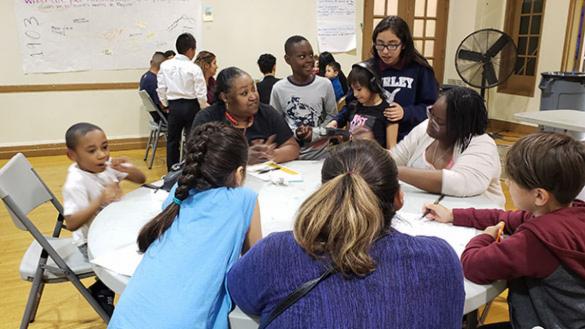 Re:Center is a creative placemaking1 initiative driven by local artists and residents and anchored in Chicago’s neighborhoods. Through Re:Center, the Chicago Park District’s fifteen Cultural Centers2 have collaborated with surrounding communities to re-imagine cultural priorities and programming at each site. From 2015 to 2019, three Cultural Centers were initiated into a three-year process that would leverage these public parks as sites of civic engagement, learning and creative communion.

In their first year, each Cultural Center worked with a Cultural Liaison to facilitate sustained convenings of community stakeholders. Working together, park staff, stakeholders and the Re:Center team hosted a “Listening Party” event where desires and needs for artistic and cultural programs were identified, alongside challenges specific to those communities and parks. In the second year, a newly formed cultural committee and a contracted artist-in-residence envisioned and developed a culminating event, public art work, or community project. These formalized roles and structure helped to achieve some of those unique cultural priorities identified in the first year. The third year would mark the gradual close of the Cultural Liaison’s tenure at that location, with the intention that the cultural committees and park staff would be empowered to function independently as programmers of their local Cultural Centers.

In this unique model, community members, artists, and park staff work together to envision Chicagoans as cultural stewards3 of our public parks and Cultural Centers. Partially funded by NEA Our Town and in partnership with Lookingglass Theater, Re:Center was developed and guided by the Arts & Culture Unit of the Chicago Park District as a means to support communities with cultural programming resources and skill sets. The deep work of Re:Center continues in new forms, with an asset mapping initiative funded in part by the City of Chicago’s Department of Cultural Affairs and Special Events, cultural partnerships that continue to grow out of Re:Center; and expanded support of Cultural Center staff and programs from the Arts & Culture Unit.

1.  Creative placemaking
Creative Placemaking is an evolving field of practice that intentionally leverages the power of the arts, culture and creativity to serve a community’s interest while driving a broader agenda for change, growth and transformation in a way that also builds character and quality of place. Source: Artscape

3.  Cultural stewardship
The act of preserving, growing and caring for creative, ceremonial and aesthetic practices held by a particular place or people. In the case of Re:Center, we also include a focus on shared public space - our parks. Source: Arts & Culture Unit.