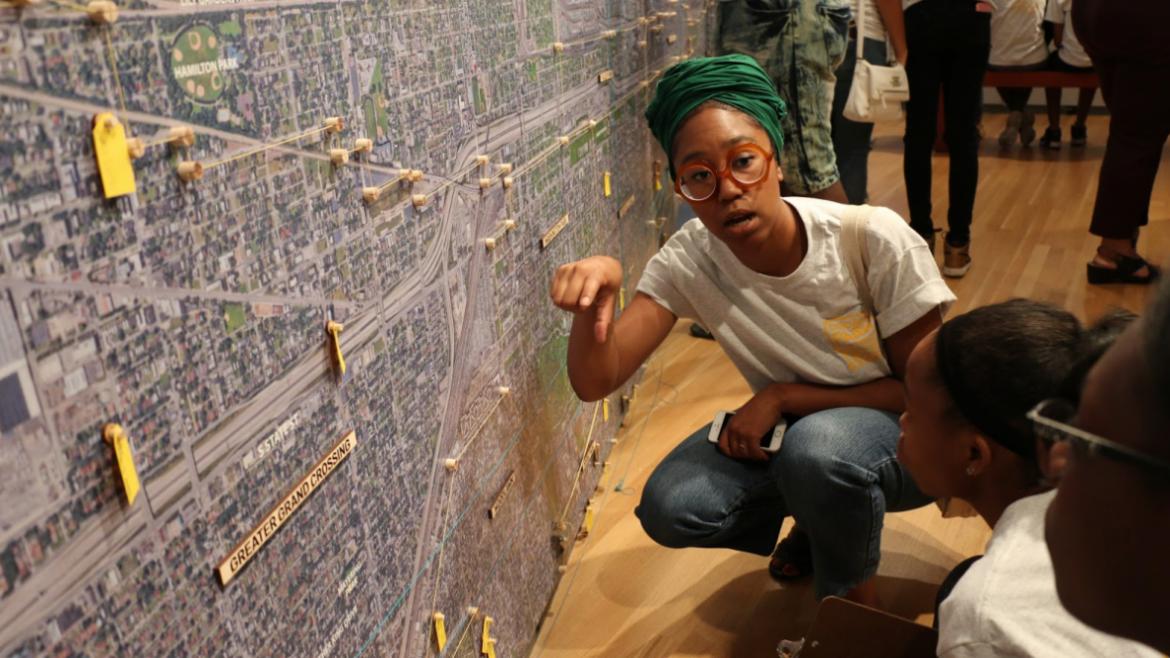 TRACE celebrates its 10-year anniversary of nurturing teens as cultural stewards of the communities that they serve.
Photo: Chicago Park District/ TRACE

The Chicago Park District will host two events to commemorate the 10-year anniversary of the TRACE (Teens Re-Imagining Art, Community & Environment) initiative. The festivities will kick off with a Block Party at the Englewood Line, located near 58th and Halsted, on Thursday, August 16 from 2 pm to 4 pm. TRACE’s 10th Anniversary Gala will be held at the Museum of Contemporary Art’s Commons, located at 220 W. Chicago Ave., on Friday, August 17 from 6 pm to 8 pm. Both events are free and open to the public.

During the free block party, TRACE teens will unveil two new murals, painted on the cement wall alongside the Englewood Line, the elevated nature trail in the South Side community. The mural project highlights the history of Englewood and looks to the future of the community. TRACE summer interns created the graphics with help from local artists Just Flo and JoVanna Jackson.

TRACE is a recent recipient of the 2018 Field Foundation grant for their excellence in arts programming. This grant is awarded to initiatives whose work bolsters creative production in communities across the city and aims to lift new voices, develop community agency, and explore creative enterprise. Attendees are invited to enjoy free food and music by Selah Says. This event is co-sponsored by Grow Greater Englewood.

The $35,000 grant award comes as TRACE celebrates its 10-year anniversary of nurturing teens as cultural stewards of the communities that they serve. The grant will support the expansion of TRACE programming to a second location at Austin Town Hall on Chicago’s West Side and the establishment of a Community Curatorial Fellowship. TRACE currently operates from Hamilton Park, located in Chicago’s Englewood community.

The fellowship opportunity will be announced to the public at the 10th Anniversary Gala. The centerpiece of this celebration will be #IAMTRACE, a multi-media exhibition curated collaboratively by the summer cohort of TRACE interns with support from lead teaching artists Concitta Cavin and Zakkiyyah Najeebah.

“We are grateful to the Field Foundation for supporting the next phase of the TRACE program and for providing our teen cultural stewards with new opportunities to make creative connections with cultural influencers for the betterment of their communities,” said Chicago Park District CEO & Superintendent, Michael P. Kelly.

“This support will create safe ‘third spaces’ for creative production, foster community bonds, and increase access to cultural experiences within Chicago communities. The eventual goal is supporting community identity through the arts while advancing hubs of creativity and innovation in divested neighborhoods of Chicago,” said Tempestt Hazel, Arts Program Officer for the Field Foundation.

During the Austin Town Hall residency, TRACE teens will partner with photographer and community organizer Vanessa Stokes to create an exhibition of the work of Stokes’ father, photographer Darrell Creightney.

For the Community Curatorial Fellowship, the Chicago Park District will send five (5) TRACErs on a weeklong fellowship in New York City to conduct research and to network with cultural professionals. Fellowship participants will then return to Chicago where they will develop new creative knowledge in collaboration with professional mentors. Their work will then be presented at various cultural institutions around Chicago.