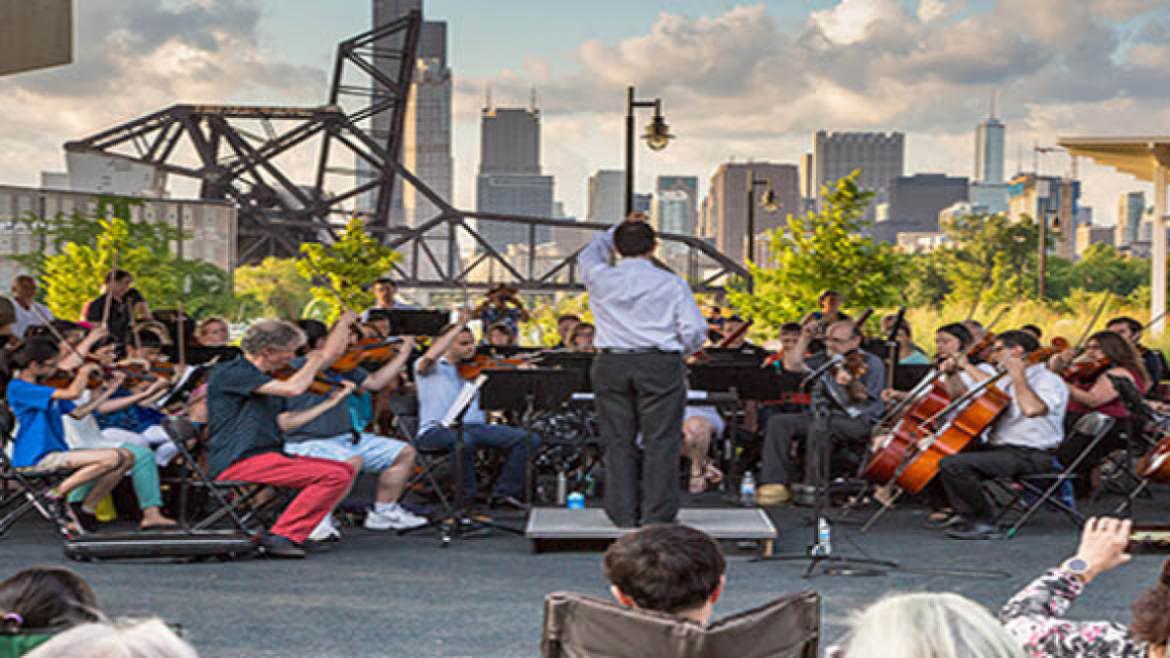 122 artists and cultural organizations, team up with the Park District to feature over 2,000 hours of safe, high quality, cultural programming in 250 Chicago neighborhood parks citywide, starting May 31;
Movies in the Parks launches June 14.

The Chicago Park District Superintendent and CEO Rosa Escareño together with local arts organizations, performers and community members, today announced the 10th anniversary of the season of Night Out in the Parks. Night Out in the Parks, the free event series accessible to all ages and abilities, celebrates Chicago’s vibrant cultures and emerging and seasoned arts professionals in parks citywide, starting May 31.  All events are available to view at www.nightoutintheparks.com and on the Night Out mobile application My Chi Parks™.

Launched in the summer of 2013, Night Out in the Parks is a key component of the Chicago Park District’s citywide vision for art and culture. Park neighborhood activations foster a long-time appreciation for the arts and parks among diverse audiences, and continue to create safe spaces for entertainment and educational experiences to thrive throughout the year.

In the span of a decade, Night Out in the Parks has welcomed over 350 Chicago-based artists to showcase their diverse talents in parks citywide, employed 10,617 artists and crew members, and entertained nearly 1.8 million park visitors during 12,901 cultural events and over 1,500 movie selections in Chicago’s parks. Chicago Park District’s arts and culture team completed over 45,000 hours of on-site work to bring free, accessible cultural events to Chicago’s neighborhoods. Since its inception, Night Out in the Parks has provided thousands of hours of safe, diverse, and unique arts programming with $750,000 in yearly grant support from the Department of Cultural Affairs and Special Events (DCASE).

“The Night Out in the Parks signature park program has successfully produced 10 years of community-based entertainment, enhanced the quality of life across Chicago, facilitated access to the arts for all Chicagoans, and increased Chicago parks’ safety and community connectivity through the arts,” said Chicago Park District Superintendent & CEO Rosa Escareño. “We look forward to many more years of bolstering arts partnerships and uplifting Chicago’s diverse arts community and culture, while fostering new opportunities to safely enjoy more than 2,000 hours of family-friendly, cultural entertainment in our parks.”

Every year, the multi-genre event series’ community impact is significant, and as it expands to reach new audiences, more established companies and emerging artists lend their talents to perform in Chicago’s parks. In 2018, the program was recognized for its outstanding achievement with the National Parks and Recreation Association Innovation Award for Social Equity, which acknowledges Night Out in the Parks’ commitment to ensure that every Chicago neighborhood has access to quality arts and cultural programming that reflects the City’s robust cultural landscape.

Notably, the reimagined 2020-2021 hybrid season presented the most challenges, but was among the most rewarding. Park District organizers were given a worthwhile opportunity to support artists sidelined by the pandemic by shifting to a virtual season, which featured 69 socially-distanced outdoor quality performances and showcased more than 40 artists and neighborhood organizations in a curated collection of 103 “Your Night Out at Home” digital performances. All of the performances are available for the public to view on-demand at chicagoparkdistrict.com/night-out-at-home.

Throughout Throughout the course of the last ten years, arts partners have creatively reimagined how-to use Chicago’s outdoor, green performance spaces to engage audiences civically and produce world-class theater, music, movies, dance, site-specific work, nature programs, and community festivals in neighborhoods across the city. Performances staged by established large-scale productions, like Shakespeare in the Parks, provided the inspiration for the community-partner based touring model that is the foundation of the Night Out in the Parks series, and returning partners, the Chicago Philharmonic’s “Side by Side,” exemplify collaboration at its best by showcasing the beautiful music that can flourish from inviting community musicians to play alongside prestigious professionals.

This year, the 10th annual Night Out in the Parks edition will bring over 700 world-class events, including over 158 movies, 146 dance showcases, 128 musical performances, 120 theater, 71 nature experiences, 22 community festivals, 13 wellness immersions, and numerous holiday-themed events to every one of the city's 77 community areas and in all 50 wards.  More than 120 Chicago-based artists will be involved as part of the family-friendly park event series in 250 parks citywide. Nearly all events are offered with free admission.

The overarching themes for the 2022 season are the following:

In 2022, the Park District will highlight more than 140 dance-themed outdoor performances that celebrate Chicago’s rich tapestry of cultures and storied dance industry as part of the “Year of Chicago Dance.” Among them, Ginger Krebs’ "All We Can See from Here," which features the bodies of four dancers merging to form interlocking shapes like mirrored particles shifting in a kaleidoscope. This sensory performance, in partnership with High Concept Labs, will be held at Walsh Park on June 11. New partners, Mitsu Salmon and soundscape producer La Spacer, will present Orchidelirium, an interdisciplinary dance piece that explores the history and symbolism of orchids as they relate to imperialism, desire, and the environment. Audiences are invited to view this interactive piece on July 29 at Kilbourn Park and August 5 at McKinley Park.

This year’s events and performances by new and returning partners, include:

Movies in the Parks
June 14 – August 30 (week of September 6 for rescheduled dates, as needed)

The Chicago Park District will bring big-screen entertainment to local parks for the 22nd year of Movies in the Parks. The jam-packed 2022 summer lineup will feature fan favorites like Encanto and the superhero movie Spider-Man: No Way Home. The roster will include an array of critically acclaimed films, cult classics, remakes, sequels and biopics, including Sing 2, Space Jam: A New Legacy, Ghostbusters: Afterlife and King Richard. Everyone may enjoy Hollywood’s best films under Chicago’s skies at no cost.

The season will debut with the traditional Alfred Hitchcock film Rear Window, on June 14. This movie is part of the Lakeside Cultural Series, which will feature mostly dance-themed titles in harmony with the YOCD, like Footloose (June 21), Center Stage (June 28), Happy Feet (July 5), Drumline (July 12), Bring it On (July 19) and more. The dance film series continues through August 30 at lakefront park sites.

Special screenings of international and multi-lingual films are possible through a partnership with the Chicago Latino Film Festival and the French Consulate General in Chicago.

The “Villa Albertine” – French Consulate General in Chicago selections are below:
•    June 16- March of the Penguins at Lincoln Park Cultural Center
•    June 23- Miniscule: Valley of the Lost Ants at Osterman Beach
•    June 30- The Gleaners and I at Walsh Park
•    July 7- Tomorrow at Belmont Harbor

Movies in the Parks is presented by DePaul University, and supported by S.Pellegrino® Sparkling Natural Mineral Water and Xfinity. All movies begin at dusk, weather permitting. Call 312.742.1134 or visit facebook.com/ChicagoParks.Movies for daily listings and weather-related cancelations.

Chicago SummerDance in the Parks is a social dance party bringing people of all abilities and ages together for free dance lessons followed by live music and DJs. Many styles of dance are explored throughout this series, which is produced by Chicago’s Department of Cultural Affairs and Special Events (DCASE). #YearofChicagoDance

Park visitors will be led through a transformative 90-minute experience filled with song, music, dance, and agricultural tours at several Urban Growers Collectives' urban farms as part of the Red Clay Dance Company’s Creating Fertile Grounds for Healing experience. This intergenerational community-based artistic exchange engages community and audiences around the creative process of their work Rest.Rise.Move.Nourish.Heal.

Deeply Rooted Dance Theater will offer 45-minute public performances by members of its professional, apprentice, and youth companies. The live music ensemble will feature multi-instrumentalist, singer/writer, producer/composer, Sam Thousand (formerly Sam Trump), and the music of Chicago’s very own, Quincy Jones. Each performance will be followed by a conversation about the performance between Deeply Rooted and audience members.

M.A.D.D. Rhythms (Making A Difference Dancing Rhythms Organization) is a phenomenal tap dance collective whose ‘sole’ purpose is to spread the love and joy of the dance genre of tap worldwide. Founder, Bril Barrett, has always had a deep respect, love, and admiration for the music of the legendary R&B, jazz and blues singer and musician Nina Simone. He embarked on creating work with M.A.D.D. Rhythms, live musicians and vocalists to pay respect and homage to Nina Simone.  Nina Simone was the definition of a strong woman, genius musician, gifted storyteller and committed activist.

Dance in the Parks brings free, professional, outdoor dance concerts to 10 neighborhood parks. The all-ages performances feature works created and performed by professional Chicago dance artists in a wide range of themes and styles, including modern, jazz, contemporary, and tap works. In its 14th season, the showcase gives local youth companies an opportunity to perform across the city. Bring your picnic dinner and enjoy the show!

Choreographer Nejla Yatkin will surprise park visitors in a daily pop-up performance daily from May 31 to June 18 in parks around the city to bring hope and celebrate the arrival of summer. In many myth and cultures, the Firebird is a messenger of hope, and believed to purify the land and waters and hence bestow fertility.

The Chicago Astronomer, Joe Guzman, and his enthusiastic astro-crew connects park visitors of all ages and cultures with the cosmos via telescopic viewing, instruction and guidance across urban skies.

The Full Moon Jam brings together artists and dancers from around the world by providing a communal space for fire performers and drummers to gather and share their creative gifts on the beautiful shores of Lake Michigan. Set to the percussive beats of local drummers under a full moon, this unique fiery event is truly a marvel to behold.

Each summer, the Grant Park Music Festival brings fun and engaging concerts to neighborhoods across Chicago featuring musicians of the Grant Park Orchestra and Chorus, and the Festival's Project Inclusion String and Vocal Quartets. Bring a blanket or picnic chair and join us in your neighborhood park for a free, hour-long, family-friendly concert with a little something for everyone to enjoy

Chicago Shakespeare Theater presents Chicago Shakespeare in the Parks. Through a creative collaboration with community partners, the reimagined summer tour will bring a new take on a Shakespeare play to Chicago parks. Neighborhood artists, musicians, and dancers will take center stage alongside actors to create a multidisciplinary, multilingual, and wholly unique artistic event celebrating resiliency and connection.

Midnight Circus returns for another season of high-flying 'Open Air' circus! Acrobats and artists from all across the globe and all-around Chicago make up this incredible ensemble that has put our city on the International circus map. All tickets are free! However, we encourage all guests to reserve their spots online at. Tickets become available for reservation the Monday before Saturday shows.

The full list of programming is on the Night Out mobile application My Chi Parks™, available to download on Apple and Android devices, makes planning exciting and affordable summer outings an ease. Users can browse through events by date, location and interest to discover what interesting activities are happening in a park near you. More information is available at www.nightoutintheparks.com or call 312.742.PLAY.

Park audiences are encouraged to use the hashtag #NightOutInTheParks to share photos of their 10th anniversary Night Out in the Parks experiences for a chance to see them posted on the Chicago Park District’s social media channels.