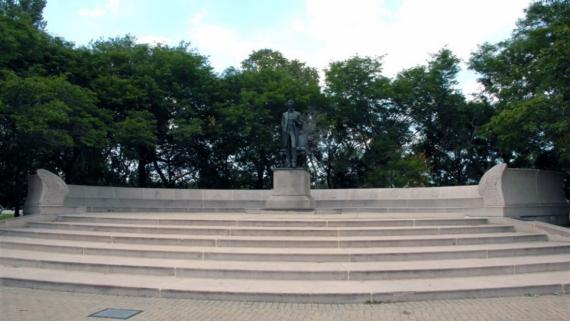 In 1887, the New York Evening Post described Abraham Lincoln: The Man as “the most important achievement American sculpture has yet produced.” Produced by renowned sculptor Augustus Saint-Gaudens the artwork was funded by a $40,000 gift left by Chicago lumber merchant Eli Bates (1806–1881) in his will for an Abraham Lincoln monument in Lincoln Park. Although Saint-Gaudens had initially refused to participate in a design competition for the project, the committee selected him after rejecting all the applicants to the contest.

The commission was extremely meaningful to Augustus Saint-Gaudens (1848–1907), an Irish immigrant who had apprenticed a cameo cutter prior to becoming one of the nation's foremost sculptors of the time.
The acclaimed artist had great reverence for Abraham Lincoln. As a young man, Saint-Gaudens had seen Lincoln during his journey to Washington to be inaugurated as the sixteenth president of the United States. Several years later, the sculptor was deeply moved by the sight of Lincoln’s body lying in state.

In 1884, when he began working on Abraham Lincoln: The Man, Saint-Gaudens wanted to find the perfect model for the sculpture. A friend told him that there were many “Lincoln-shaped men” in Cornish, New Hampshire. Saint-Gaudens visited, established a summer home and art studio there, and soon discovered Langdon Morse, a six-foot-four tall farmer from Windsor, Vermont, to serve as his model. In addition to finding his model, Saint-Gaudens benefited from newly rediscovered plaster life mask and casts of Lincoln’s hands that another sculptor, Leonard W. Volk, had made in 1860. One of the reasons that Saint-Gaudens's sculpture looks so realistic is that the face and hands were created from those molds.

Saint-Gaudens’s emotionally powerful portrayal of Lincoln stands in front of an enormous chair in a thoughtful stance as though he is about to deliver a speech. Known commonly as the Standing Lincoln, the twelve foot bronze figure and chair are mounted on a monumental semicircular exedra designed by architect Stanford White. A crowd of 10,000 attended its unveiling by Abraham Lincoln’s grandson and namesake on October 22, 1887. There are replicas of the renowned sculpture in London and Mexico City. Chicago’s sculpture has had several conservation treatments.