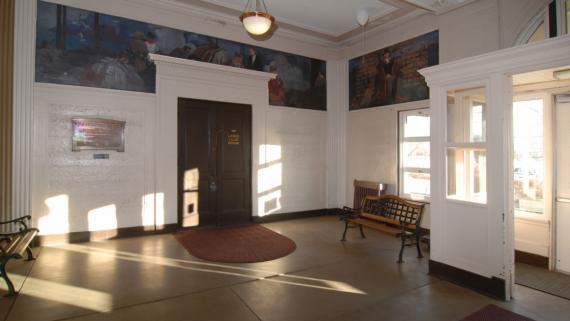 Acclaimed artist John Warner Norton was commissioned to create this impressive series of murals through a fund established by John Barton Payne (1855–1935). A Virginian who moved to Chicago to work as an attorney and Superior Court judge, Payne held several nationally significant positions such as chairman of the American Red Cross and United States Secretary of the Interior under President Woodrow Wilson. Judge Payne became a member of the South Park Board of Commissioners in 1909, and served as its president from 1911 until 1924. Within his first few years on the board, Payne decided to donate the position’s $3,000 annual salary to create a fund for artworks to enliven field house interiors.

Payne’s fund commissioned artworks of “statesmen, historical personages and colonial day events and scenes.” Many of the recently constructed field houses were in South Side neighborhoods with large immigrant populations, and the murals and paintings created through the fund were meant not only to decorate the buildings but also to provide community members with a greater understanding of American history. Such is the case with Hamilton Park's Historical Series by John Warner Norton.

An illustrator, painter, and teacher, John Warner Norton (1876–1934) headed the mural department at the School of the Art Institute of Chicago from 1910 through 1929. During and after this period, Norton produced large murals for many buildings throughout and beyond the Midwest, including banks, schools, courthouses, and museums, as well as several Chicago skyscrapers. He often worked closely with significant Chicago architects such as Frank Lloyd Wright and firms including Purcell and Elmslie and Holabird and Root.

Norton was known for creating murals that harmoniously blend into their architectural contexts. Hamilton Park’s extensive series is an excellent example of this synthesis. Even though Norton painted the series more than a decade after the completion of D. H. Burnham and Company's handsome building, the murals look as though the lobby space was designed specifically for them. They each fit within architectural panels along the upper part of the lobby walls. Edged by architectural trim, some of the long horizontal panels are flanked by double pairs of classical pilasters, and a couple of them fit into coved areas of the walls. The sense of classicism is further enhanced by the room's numerous pairs of Ionic columns.

The Hamilton Park murals depict notable American presidents, military leaders, and statesmen such as George Washington, Thomas Jefferson, James Monroe, and George Rogers Clark. The portraits also include biographical information in vibrant gold lettering. Interestingly, most of the historical figures depicted in the murals came from Virginia, as had John Barton Payne. In addition to the biographical panels, other horizontal stretches are richly illustrated with scenes of Native Americans, explorers, and pioneers and romantic American landscapes.