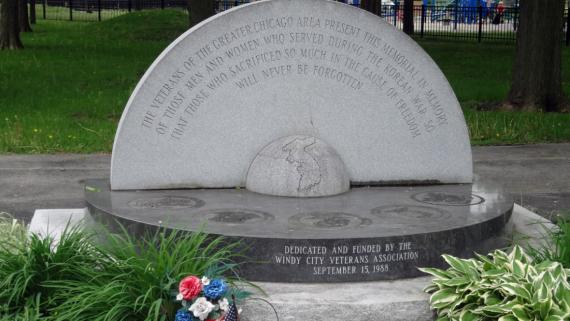 In 1986, as Korean War veteran Ed McCarthy marched in a downtown Chicago parade honoring Vietnam War veterans, he began to think of ways to memorialize those who served with him in the conflict largely known as the “Forgotten War.” After North Korean troops invaded in 1950, the United Nations urged its members to help support South Korea. Although the United States Congress never made a formal declaration of war, millions of Americans fought in the Korean War between 1950 and 1953, and more than 50,000 were killed.

McCarthy suggested the idea of creating a Korean War Memorial to the Windy City Veterans Association. The group organized a variety of fund-raising events and received donated services from the engraver, Maurice Moore Memorials. The semi-circular form is inscribed: “The veterans of the greater Chicago area present this memorial in memory of those men and women who served during the Korean War so that those who sacrificed so much in the cause of freedom will never be forgotten.” Dedicated on September 15, 1988, the Kennedy Park memorial was one of the nation’s first monuments honoring America’s involvement in the Korean War.