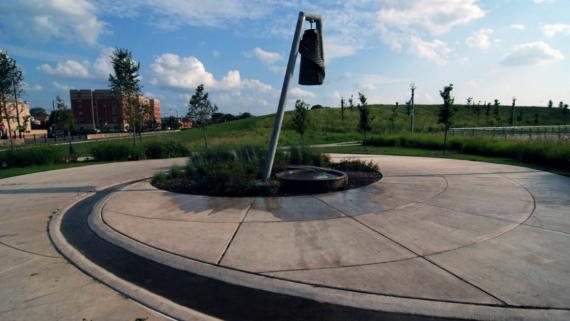 In 2009, the Chicago Park District completed the construction of a new 27-acre park in the Bridgeport neighborhood. Once an ancient coral reef, the site served as a working limestone quarry from the 1830s to 1970, and then became a landfill for clean construction debris. The Chicago Park District convened several community meetings to determine the needs of local residents, and hired Site Design Group to create a plan that transformed the old Stearns Quarry into an exciting new park.

The park’s environmentally-sustainable design was inspired by the natural history of the site. Native plants, fossilized limestone boulders, quarry walls, and metal elevator shaft remnants are all incorporated into the park’s landscape. Water is also a very important design element. Ernest Wong of Site Design Group designed this galvanized metal Stearns Quarry Fountain that is vaguely reminiscent of the old cranes once used to quarry the stone. Water comes up through a ten-foot tall metal tube and drips down through a metal cylinder with horizontal ribs. The water falls into a concrete runnel that flows through terraced wetland cells and into the park’s fishing pond. Water is then re-circulated back to the Stearns Quarry Fountain. Marjorie and Roger Nelson provided a generous donation to underwrite the costs of the custom-designed fountain.

In 2010 the Chicago Park District named the new park in honor of Henry C. Palmisano (1951-2006), a Bridgeport resident who became a tireless advocate and supporter of urban fishing. He was a member of Mayor Daley’s fishing advisory committee, and in 2000 entered into a partnership with the Park District through which he donated rods and other fishing equipment. Because of his generosity thousands of Chicago children had the opportunity to learn how to fish.