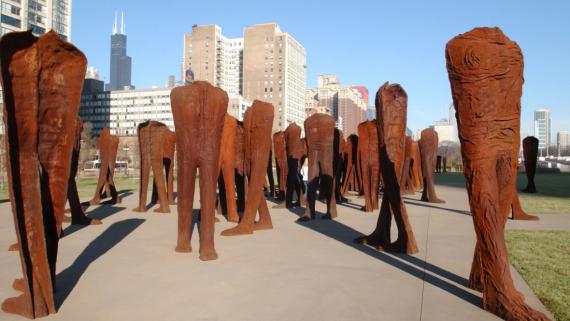 Comprised of 106 nine-foot-tall headless torsos, Agora is one of the most important and extensive sculptural installations in Chicago’s recent history. The artwork gets its name from the Greek word for meeting place. The cast iron figures are arranged in interesting groupings. Some are frozen in positions that suggest great movement, while others appear to be standing completely still. Most of them are in monumental crowds, although some appear to be pulling away from the larger group.

Valued at more than $3 million, the 2006 installation is the work of internationally-acclaimed sculptor Magdalena Abakanowicz. The Parkways Foundation received generous gifts from the Polish Ministry of Culture, Association of Fine Art Zacheta Wielkopolska, and numerous private donors for the project. Abakanowicz donated her time as did a group of dedicated Polish artists who helped her construct the pieces in Poznan, Poland.

Born into an aristocratic family just outside of Warsaw, Magdalena Abakanowicz (b. 1930) was deeply affected by World War II and the forty-five years of Soviet domination that followed. Her writings explain that she has lived, “…in times which were extraordinary by their various forms of collective hate and collective adulation. Marches and parades worshipped leaders, great and good, who soon turned out to be mass murderers.” She also asserts, “I was obsessed by the image of the crowd…I suspected that under the human skull, instincts and emotions overpower the intellect without us being aware of it.” The renowned sculptor has been exploring the theme of crowds for more than twenty years.

Abakanowicz first created sculptures inspired by the human form in the 1970s. Initially working in burlap and resin, she went on use bronze, steel, as well as iron—the material used for Agora. Even before this prominent project, Chicago was an important city to Abakanowicz. Her initial American restrospective exhibit was held here in 1982 at the Museum of Contemporary Art. In 2001, she exhibited 95 Figures from the Crowd of One Thousand-Ninety Five Figures, at the Chicago Cultural Center. While Abakanowicz’s work can be seen in museums and public spaces throughout the world, Agora is her largest permanent installation.