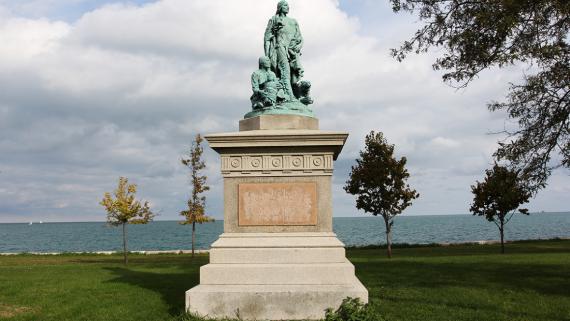 East side of N. Lake Shore Drive, on axis with W. Wellington Avenue

A memorial to the Ottawa Indians, The Alarm is one of the oldest outdoor sculptures in Chicago. Donated by Chicago businessman Martin Ryerson (1818–1887), the bronze sculptural group depicts a Native American family. The male figure is standing alongside his dog and listening for danger while the wife and baby are sheltered at his feet. The artwork is highly detailed with realistic depictions of each element including the arrows' feather fletching and ornate fabric that holds the baby to the cradleboard.

Ryseron had great admiration for the Ottawa Indians. As a young man he developed personal relationships with members of the tribe when he traded furs with them. He went on to make his fortune in the lumber industry and real estate. Ryerson commissioned the piece in 1880, long after the tribe had been forced to resettle. Art historian Mary Lackritz Gray explains, “Ryerson was especially anxious that the sculpture portray their strength of character and peacefulness and avoid the stereotype of the unfeeling savage.”

This was the first major commission for John J. Boyle (1851–1917), a Philadelphia-born artist who had spent several months observing Native Americans in North Dakota. The monument originally included bas-relief panels on each side of its base entitled “ The Peace Pipe,” “The Corn Dance,” “Forestry,” and “The Hunt.” After the original bronze panels were stolen in the late 1960s, the Park District replaced them with similar scenes of Ottawa life carved into granite and installed on each face of the base. Though first unveiled near the Lincoln Park Zoo, the monument was moved to its present location on the lakefront in 1974 to make way for the new Ape House.

Gallery:
Lincoln Park: The Alarm
Date Posted: 7/27/2015 This view shows the Alarm in its original location near what is now the Ape House in the Lincoln…
Advertisement