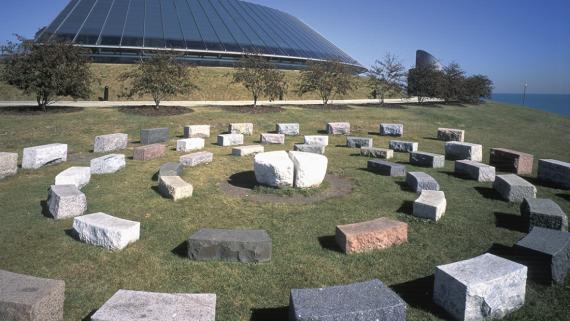 Brazilian artists Denise Milan (b. 1954) and Ary Perez (b. 1954) created America's Courtyard, an artwork composed of fifty-six rectangular blocks of granite configured in concentric circles with four large pieces of marble in the center.The work is part of the City of Chicago Public Art Collection. Originally installed near the Art Institute of Chicago, the artwork was moved to a lawn area just south of the Adler Planetarium in December 2000. At its new location, the configuration of the stone elements resembles a spiral galaxy and symbolizes an ancient celestial observatory. Astronomer Phyllis Pitluga helped the artists arrange the stones to create four pathways representing the sun’s passage during the seasonal solstices.

Milan and Perez consider America’s Courtyard a democratic and community-driven participatory sculpture, where visitors have “an opportunity to jump, meet, represent their reality, declaim, dream, in short, to transform the simple actions of everyday life into rituals.” They suggest the artwork is “a metaphor of an America where countries can live in harmony, generated by the inherent wisdom of its matter and its intrinsic order.” It is a message of reality, but also a message of idealism and hope that the artists want to instill in visitors to the sculpture.

At the time of the artwork’s initial installation, an educational program entitled Exploring America’s Courtyard was developed through a collaboration between the Chicago Arts Partnership in Education, Chicago Public Schools, and Ministry of Education of Brazil. The effort fostered an exchange between students and teachers in Chicago with those of Salvador, Bahia, Brazil.