Buckingham Fountain is closed for the season. Come visit again next spring.
× 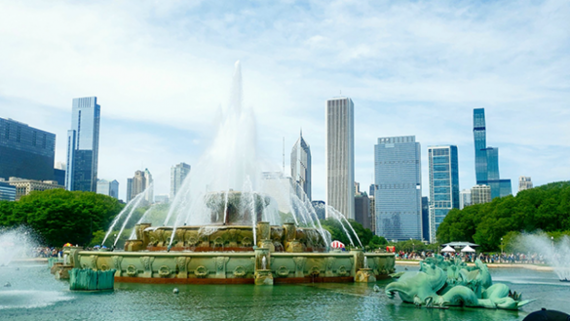 Above hours apply when fountain is open, typically May to mid-October.

The Clarence Buckingham Memorial Fountain, one of the largest in the world, is located at Columbus Drive (301 East) and Congress Parkway (500 South) in Grant Park and runs from 8 a.m. to 11:00 p.m. daily, typically from early May through mid-October, depending on weather.  Display times are subject to change during special events in Grant Park.

While in operation, the Fountain produces a major water display for 20 minutes every hour.   During the major display, a center jet shoots water to a height of 150 feet into the air. Major displays begin daily at 9:00 a.m. and continue thereafter, every hour on the hour. Beginning at dusk, a spectacular light and music display accompanies the major display, beginning every hour on the hour for 20 minutes.  After the last on-the-hour display takes place at 10 p.m., the final display of the day begins at 10:35 p.m.  The fountain shuts down just after the last display, around 10:55 p.m.

Donated by Kate S. Buckingham in honor of her brother Clarence, the Buckingham Fountain is considered one of the finest ornamental fountains in America.  It has been designated as a Chicago Landmark and a contributing feature within Grant Park’s listing on the National Register of Historic Places.

An important Chicago art patron and philanthropist, Kate Sturges Buckingham (1858 – 1937) was the last member of the Buckingham family.  Originally from Zanesville, Ohio, the Buckingham family made its fortune in grain elevators, real estate and steel.  Kate and her brother Clarence Buckingham (1854 – 1913) were both avid art collectors and benefactors who donated valuable prints, paintings, sculptures, and objects to the Art Institute of Chicago.  In the mid 1920s, Kate Buckingham decided to provide funds for a magnificent fountain in Grant Park as a memorial to her brother.

Architect Edward H. Bennett of the firm Bennett, Parsons and Frost, designed the fountain and French artist Marcel Loyau produced the sculptural elements.  Architects Jacques Lambert and Clarence W. Farrier served as associates on the project.  The fountain is composed of pink Georgia marble, with some granite elements, and bronze sculptures.

During the planning phases, Kate Buckingham expressed that she wanted the fountain’s lighting to emulate “soft moonlight.” According to an early Chicago Park District brochure, “though advanced in years,” Miss Buckingham “worked night after night with technicians, trying out various colors of glass and adjusting the control of electric current” to produce “blends… that pleased her— and indeed, there is a mystical aura around the lighted fountain suggesting moonlight— in fairyland.”

The water displays are powered by three pumps.  Pump 1 is the primary pump that keeps the fountain running throughout the day.  Pumps 2 and 3 operate during the major display:

The Fountain has 133 jets in the following configurations:

The Fountain's water capacity is 1.5 million gallons. Depending on wind conditions, major displays recirculate approximately 14,100 gallons of water per minute conveyed through 134 jets. Water is recirculated from the base pool after the basins are filled and not drawn from the outside except to replace losses from wind and evaporation.

The fountain has its original underground pump house with two levels.  The control room is located on the first level, and the lower level pump room is 35 feet long, 25 feet wide.  The original  pumps and motors are still in operation today.

Kate Buckingham envisioned a fountain whose effect was that of "soft moonlight." She worked many nights with technicians, testing the various colors of the glass filters and currents to produce an ethereal, mystical aura.

The Fountain contains 820 lights in the following configurations:

The Buckingham Fountain was manually operated from 1927 through the 1970s.  The operations were first fully automated in 1980, when the Chicago Park District entered into a contract with Honeywell.  The computer was located on site, but the monitoring system took place remotely, off premises.  For the first several years, the monitoring system was based in the Chicago suburbs.  In the mid 1980s,   the monitoring system was moved to Atlanta, for several years, but then returned to suburban Chicago in 1994.  The Chicago Park District upgraded the Buckingham Fountain computer in 2013 with a non-proprietary Allen-Bradley PLC System.  Today, all of the automation and monitoring takes place on-site, with remote alarm monitoring and notification.

Officially opened to the public on May 26, 1927 and dedicated on August 26, 1927, the Clarence Buckingham Memorial Fountain is the centerpiece of Grant Park—Chicago's "Front Yard.” For decades this site had been the subject of heated controversy. Renowned architect Daniel H. Burnham (1846–1912) planned to build the Field Museum of Natural History in this location in the center of the park. Businessman Aaron Montgomery Ward fought four Illinois State Supreme Court battles to prevent the building’s construction here in order to keep the park’s lakefront view “free and clear” of any obstructions. After Ward won his final case in late 1910, the South Park Commission did not have alternate plans for Grant Park, and the site remained unimproved for many years.

Finally, in the early 1920s, architect Edward Bennett (1874–1954), longtime associate of Burnham and co-author of his seminal Plan of Chicago, prepared new plans to complete Grant Park. Bennett envisioned a monumental fountain to serve as the park’s formal focal point without obstructing views of Lake Michigan. Philanthropist and art patron Kate Sturges Buckingham (1858–1937) agreed to donate one million dollars for the fountain, which was dedicated to her brother, philanthropist and businessman Clarence Buckingham (1854–1913).

Bennett designed the monument in collaboration with French sculptor Marcel Francois Loyau (1895–1936) and engineer Jacques H. Lambert. Inspired by the Latona Basin at Versailles, the structure comprises four basins clad in elaborately carved granite and pink Georgia marble. The Buckingham Fountain; however, is twice the size and re-circulates approximately three times more water than its French counterpart. Chicago’s fountain is also unique as it symbolizes Lake Michigan. Conveying the enormity of the lake, its major display uses as much as 15,000 gallons of water per minute and sprays water to a height of 150 feet from the ground.

For years, the fountain was entirely manually operated by two stationary engineers who each worked a daily twelve-hour shift. Historically, the major water displays occurred only twice a day, three times a week. These displays were so popular that they began to be offered every day in the late 1950s. The engineers’ job became even more involved at night. They used a keyboard with twenty-one electric switches that could fade, brighten, and blend colors to create numerous light effects. Although the light show was first automated in 1968, the water continued to be manually operated until 1980, when the operations were fully computerized. From 1983 to 1994, the fountain’s computer monitoring system was located in Atlanta; however, today the computer is located on site and monitoring takes place in a Chicago suburb. In 1994, the Buckingham Fountain underwent a major conservation project that addressed some of its masonry problems. Buckingham Fund of the Art Institute and the Chicago Park District cooperatively funded the project. Between 2009 and 2012 additional repairs were made including landscape improvements surrounding the monument, plumbing upgrades, and computer upgrades.