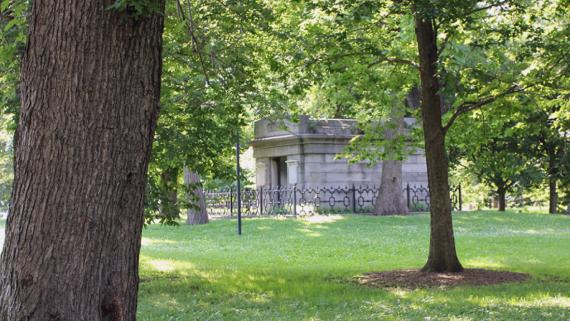 The Couch Tomb is the last above-ground reminder of Lincoln Park’s earlier history as a public cemetery. Ira Couch (1806–1857) moved to Chicago from New York with his brother James Couch (1800–1892) in 1836. After operating a store together for a year, they leased the Tremont House at Lake and Dearborn Streets, and the two brothers became inn-keepers. Although the original building burned down, they ran several subsequent hotels that used the Tremont name.

Ira Couch hired John M. Van Osdel (1811–1891), the city’s first professional architect, to design a family mausoleum in the City Cemetery. Osdel, who had moved here from New York, was architect of Chicago’s first City Hall and the Couch’s 1850 Tremont House. Ira Couch and several other members of the Couch family were interred in the mausoleum.

After the cemetery land became part of Lincoln Park in 1869, families were expected to make arrangements to move the remains of their relatives. It is not entirely clear as to why the Couch Tomb was left behind. It seems likely; however, that surviving family members thought it too expensive to move the fifty-ton structure to another cemetery. By 1899, the Lincoln Park Commissioners asserted that “…it would be impossible to remove the vault, except at great expense, and the Commissioners preferred to allow it to remain as an interesting reminder of the Park’s origin.”

In 1999, through the auspices of the Parkways Foundation, the Elizabeth Morse Genius Charitable Trust gave a gift of approximately $100,000 for improvements to the Couch Tomb. The project included cleaning and tuck-point the tomb's masonry, recreating its original ornamental fencing, and installing lighting for nighttime illumination.

To learn more about the history of the City Cemetery and other nearby burial grounds see http://hiddentruths.northwestern.edu.