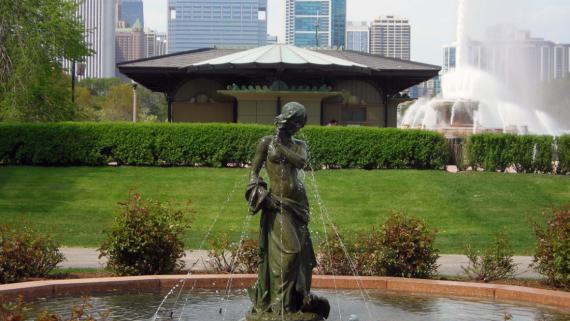 Crane Girl, Fisher Boy, Turtle Boy, and Dove Girl are four delicate-looking bronze figures—each standing in the center of its own circular fountain with the associated animal its feet. Crane Girl and Fisher Boy are north of the Clarence Buckingham Memorial Fountain while Turtle Boy and Dove Girl are to the south.

Leonard Crunelle (1872–1945), an artist especially well-known for sculpting figures of children, created the four Fountain Figures. Full-size plaster models of these sculptures were originally displayed in a 1908 outdoor art exhibition in Humboldt Park. The Chicago Tribune explained that the purpose of this exhibit was to “demonstrate the beauties and the wonderful possibilities of a skillful combination of landscape gardening and sculpture.” Jens Jensen (1860–1951), who is now recognized as the dean of the Prairie style in landscape architecture, placed the figures at the four corners of a rectangular reflecting pool in the center of Humboldt Park’s circular rose garden. At the time of the exhibit, a magazine article suggested that the Fountain Figures “appeal to the childish fancy,” in everyone.

The original plaster versions of the Fountain Figures were so well-received that the West Park Commissioners soon had them recast in bronze for permanent installation. The whimsical Fountain Figures remained in their Humboldt Park location until the early 1950s, when they were defaced by vandals. The sculptures went into storage for more than a decade until 1964, when the Chicago Park District installed them in the four circular fountains as part of a new Grant Park Rose Garden. In addition to the Crane Girl, Fisher Boy, Turtle Boy, and Dove Girl, Crunelle’s extant works in Chicago include the Richard Oglesby Monument in Lincoln Park, the Victory Monument on Martin Luther King Drive, and sculptural relief panels on the doors of the Museum of Science and Industry.