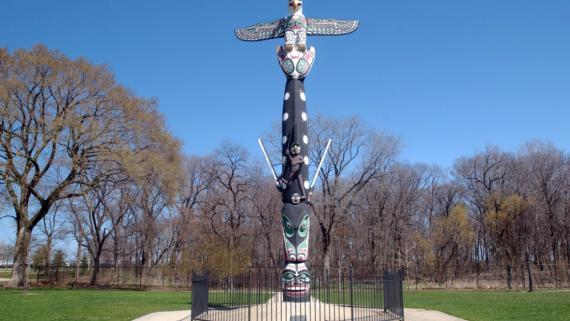 In 1929, James L. Kraft, founder of Kraft Foods Inc., donated the Kwa-Ma-Rolas totem pole to the city of Chicago. A collector of jade and other antiquities, Kraft often traveled to Alaska and the Pacific Northwest to find and buy artifacts. On one such a trip, he found two totem poles believed to have been carved by Haida Indians around 1900. In 1926, after lengthy negotiations with government officials of British Columbia, Kraft purchased the totem poles and transported them to Chicago on flatbed railroad cars. One was installed at a family estate in Wisconsin, while the other remained in a factory yard until Kraft donated it to Lincoln Park. At its dedication in June 1929, local Native Americans danced in costume with students from Alcott School in a pageant symbolizing Kwanusila—the thunderbird—and other carved figures depicted on the forty-foot pole.

More than fifty years later, the Field Museum uncovered new information about the totem pole during preparations for a 1982 exhibition entitled “Maritime Peoples of the Arctic and Northwest Coast.” Researchers determined that the pole was carved by the Kwakiutl Indians of Vancouver Island rather than the Haida of the Queen Charlotte Islands, as previously believed. This discovery and concerns about the deterioration of the wood in its outdoor setting prompted the Canadian government to request the return of the original totem pole. The Chicago Park District agreed to donate Kwa-Ma-Rolas to a museum at the University of British Columbia. But first, Kraft, Inc. hired Tony Hunt (b. 1942), a Kwagulth Indian from Canada, to transport the artifact to his village on Vancouver Island, where it served as a model for a replica totem pole. Hunt carved an exact copy out of Western red cedar. Installed in its historic location in Lincoln Park, the replica totem pole was officially dedicated in 1986.

The Chicago Park District conserved the replica Kwa-Ma-Rolas totem pole in 1996. This included removing loose paint, filling in cracks, recreating the missing ears of the eagle, and some repainting.