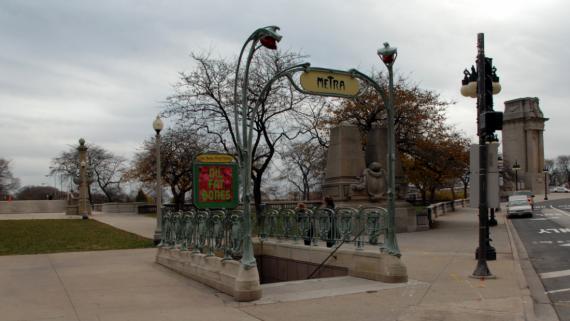 This twenty-first century entrance to Chicago’s Metra train at Michigan Avenue and Van Buren Street looks as though it belongs in Paris. Its sculptural elements have been reproduced from the original historic Metro entrances of Paris, designed by Hector Guimard. Often considered the quintessential French Art Nouveau artist and architect, Guimard (1867–1942) developed highly stylized designs with floral and curvilinear motifs between the 1890s and 1920s. Guimard was an advocate for industrial standardization before this was a common notion, and he believed in executing projects on a grand public scale. He designed a series of Art Nouveau style Metro entranceways for Paris in 1900.

The Parisian transit authority, the RATP, created this reproduction from Guimard’s original molds. The RATP and the Union League Club of Chicago donated this station to forge a visual connection between Chicago and its Sister City, Paris. They also created reproductions for two of Paris’s other Sister Cities, Lisbon and Mexico City. Although completed in 2003, Chicago’s Paris Metro Entryway was not officially dedicated until Bastille Day, 2005. The City of Chicago’s Public Art Program not only co-sponsored this project, but also presents an on-going series of artist projects which are displayed on the station’s Michigan Avenue sign board.