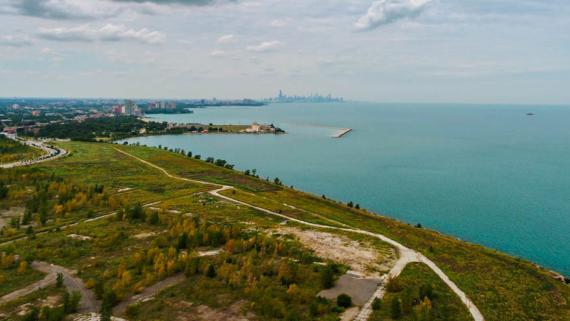 Park 566, also known as "USX," is a 68.2 acre park space that was once the site of U.S. Steel's South Works facility. This area is currently undergoing a major restoration process in which activities include herbiciding and hand-cutting invasive plants, mechanically removing weed trees, conducting controlled burns, mowing, seeding, and installing native plants, shrubs, and trees that are suitable for prairie and savanna habitats. The resulting natural area will provide wildlife habitat and a place for people to explore and enjoy nature along Chicago's southern lakefront.

Connectivity is one of the most important considerations in any park development project. As situated, the project site is part of the Chicago Lakefront system of parks that form a greenway of public open space visited annually by millions of people. The eventual trail system at Park 566 will combine multi-use paths with less formal woodchip trails to form a network that not only highlights the site’s natural elements, but also connects it with Rainbow Beach Park to the north, Steelworker’s Park to the south, and Lake Shore Drive to the west.

Park 566, once the site of the U.S. Steel South Works facility, operated as a steel mill for more than 100 years. U.S. Steel closed the facility in 1992, and by the late 1990s all of the site’s buildings and structures were demolished.