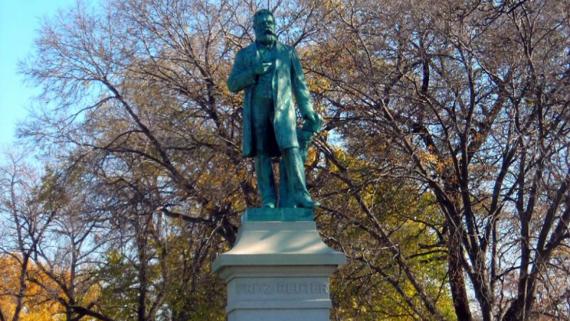 Chicagoans of German descent commissioned this statue of the influential German writer and political martyr Fritz Reuter (1810–1874). The nine-foot-tall bronze figure of Reuter stands on tall pedestal just east of the formal garden in Humboldt Park. Reuter is best known for Otto Kanellen, a volume of prose stories. But he is also remembered for writing against political oppression, a subject he understood first-hand. The Prussian government sentenced Reuter to death for high treason because he had participated in a student-run club promoting political activism. This was commuted to imprisonment, and despite poor health, Reuter continued to write throughout his years in prison. Reuter’s work included several comic novels that were popular with many of Chicago’s German immigrants.

In 1887, a competition was held to select the sculptor of the Fritz Reuter Monument. A relatively unknown German-American sculptor, Franz Engelsman (1859–c. 1920) won the competition. A Chicago resident, Englesman had his sculpture cast in Germany. On May 14, 1893, more than 50,000 Chicagoans of German descent attended the dedication ceremonies. While Reuter is less well-known to the wider community than Goethe or Schiller—for whom monuments were also dedicated in Chicago parks—the impressive attendance at this dedication shows the great enthusiasm for Fritz Reuter within the city’s German community. Four bronze relief plaques of scenes from Reuter’s best known works originally ornamented the granite base of the monument; however, they were all stolen in the sometime in the 1930s and have never been recovered.