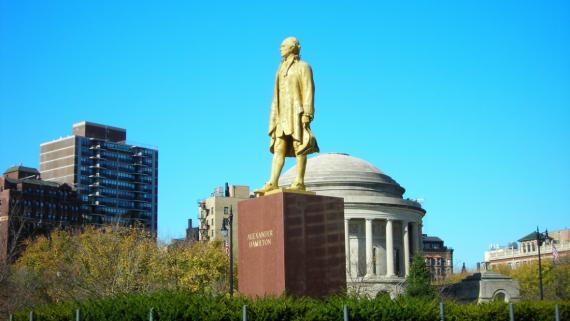 Philanthropist and art patron Kate Sturges Buckingham (1858–1937) is best known for donating the Clarence Buckingham Memorial Fountain in Grant Park, but she also commissioned this monument to Alexander Hamilton (1757–1804), whom she felt was “one of the least appreciated great Americans.” Buckingham believed that as the first Secretary of the Treasury, Hamilton had secured the nation’s financial future, allowing her own family to make a fortune in grain elevators and banking.

In 1940, Kate Buckingham hired artist John Angel to model a figurative sculpture of Hamilton. Born in England, John Angel (1881–1960) produced several artworks located in the United Kingdom including war memorials in Exeter, Somerset, and Yorkshire. He also sculpted the Francis Vigo Monument in George Rogers Clark Park in Indiana, and created artworks for many American churches.

Buckingham wanted the Alexander Hamilton Monument to have a colossal architectural setting and she originally commissioned the famous Finnish architect Eliel Saarinen (1873–1950) to create one. However, Saarinen’s proposed eighty-foot-tall columned shelter was not well received, and by the time Kate Buckingham died in 1937, the sculpture’s setting and location were uncertain.

Several years passed, and critics accused the executors of Buckingham’s estate and trustees for the monument of conspiring to allow the project’s time limit to expire so that the money would revert to the Art Institute of Chicago. After the courts ordered the completion of the Alexander Hamilton Monument by 1953, the trustees moved swiftly, hiring architect Samuel A. Marx (1885–1964) to design a tall granite setting for the sculpture's newly-selected Lincoln Park site. The trustees also decided to gild the bronze statue.

The sculpture stood on Marx’s enormous seventy-eight-foot-tall cantilevered black granite exedra for four decades. When engineering studies revealed that the granite setting had structural design flaws, the Chicago Park District demolished it in 1993. Today, the gilded Hamilton sits on its simple low red granite base, the only remaining element of Marx’s exedra structure.

Gallery:
Lincoln Park: Alexander Hamilton Monument
Date Posted: 7/27/2015 When it was installed in the 1950s, the 13-foot tall figure of Hamilton sat on a three-level plaza…
Advertisement