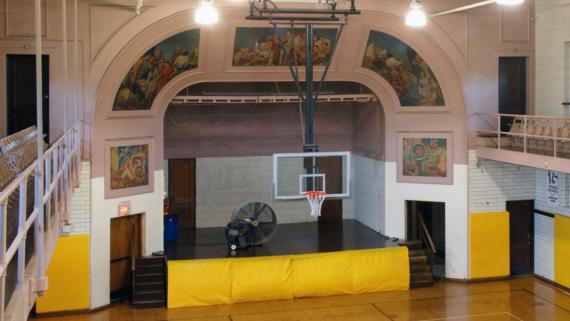 During the mid-1930s, Grand Crossing Park underwent a series of enhancements made possible by federal relief funding from the Works Progress Administration. In addition to building and landscape improvements, the funding supported employees who provided park programming. Grand Crossing offered a large array of classes and activities at this time, including social dancing; square dancing; orchestra, band, and choral groups; and arts and crafts such as weaving and model plane building.

One of the artists employed by the Chicago Park District during this period was Chester Dryan (1904–1980). In 1933, he executed a set of murals for the reproduction of the Ho-o-den Temple on Wooded Island in Jackson Park. Dryan also served as an assistant to James Edward McBurney, who was director of art for the Chicago Park District from 1935 to 1938. Mary Lackritz Gray, author of A Guide to Chicago’s Murals, has written that Dryan “directed classes and supervised mural painting” at the Washington Park Administration Building (now the DuSable Museum of African American History). It is therefore likely that Dryan painted An Allegory of Recreation at Washington Park, with the help of student assistants.

The murals were installed in the Grand Crossing field house in the mid-to-late 1930s. It includes a series of five panels that are mounted on the proscenium arch of the stage in the auditorium (which also served as the women’s gymnasium). The panels, which fit nicely along the curved arch, explore the themes of work and leisure, which are especially relevant to parks. The compositions are populated by a variety of figures, whose bodies are defined by prominent contour lines and shaded musculature. Several men handle various tools of the trade, including a rake, a wheel barrel, and a bow and arrows. Other individuals, dressed in casual or bathing attire, lounge or recline in verdant landscapes.

The lowest two compostions depict items that would have been recreationally enjoyed at the park. One panel portrays sporting equipment, such as a basketball hoop, tennis rackets, an archery target, and a boat. The other painting depicts a variety of crafts and games, including a puppet stage, a model plane, a checkerboard, and a spindle. The selection of objects represents the vital role that recreational activity played in the promotion of health and well-being.

An Allegory of Recreation | Artwork

An Allegory of Recreation | Artwork