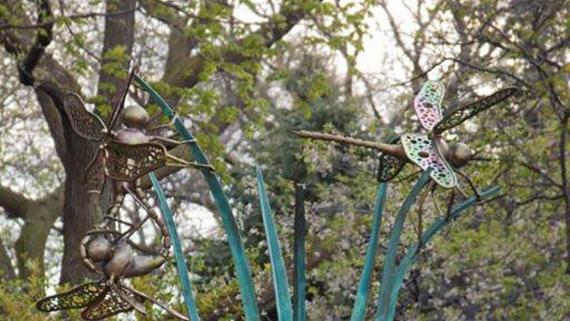 Artist's Statement: My great-grandfather shoed horses in Chicago in the early 1900’s.  After moving to the big city from Gloucester, England, with his journeyman farrier certificate he set up a small shop, later moving to the building that became Lawndale Forge.  Coincidentally, Douglas Park, where Ancient Protocol currently resides, is less than one mile away from Lawndale Forge.  My grandpa and his family and neighbors slept in Douglas Park on hot summer nights before air conditioning.  I’ve worked full time at Lawndale Forge since I was 19 and most summers throughout childhood.  Over the past decade I’ve developed skills and techniques unique to blacksmithing, as well as incorporating more modern equipment and methods.

The creation of Ancient Protocol came right after I completed a commissioned sculpture of a similar idea, dragonflies perched on tall grass.  Before installing the commissioned sculpture to its permanent site, the Metra station in Brookfield, I took photos and submitted it to the Lincoln Park Zoo Sculpture Show.  It was accepted and I had two months to make Ancient Protocol.

Creating the dragonflies for the sculpture was very gratifying. Tweaking the legs just right with a rose bud propane torch and making minute bends in the tail brought them to life. The tails are forged in various size swages and notch swage. The zinc-nickel plating that gives the iridescent appearance is an industry standard for parts and tools.  The blades of grass are forged from 3/8” angle iron.  Forging under the power hammer I folded the legs of the angle iron into stem shapes.  I pressed a texture into the grass while hot with a hydraulic press.  The patina on the grass was achieved with copper- and brass-impregnated paint and sprayed with an acid catalyst while the paint was still wet.  The roots are forged from solid bars of steel and welded to the ends and sides of the angle iron grass.  I started with a sketch for reference.  While working on the sculpture I learned a lot about dragonflies’ behavior and life to draw inspiration from. They are very fascinating creatures.