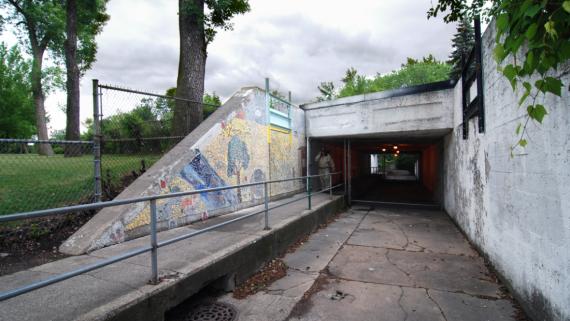 Since 2003, the Chicago Park District has sponsored an Art Camp at Rutherford Sayre Park. The popular program inspires local children to develop their artistic and creative abilities. Each summer, camp participants work together with the artist Carol Tarnoff to plan and execute art projects in the park. Past artworks include a tile mosaic birdbath and garden stones, the latter of which decorate the small planting bed next to the main entrance of the field house. Students at the 2005 camp created several painted murals. The compositions—which depict the park and the Metra train that runs through it—surround the base of the park’s tall, metal tower.

In 2010, the Art Camp became the Teen Art Conservancy Camp, with an increased emphasis on helping students pursue art on an advanced level. Tarnoff described the effort as a way to show teens who love art the possibilities of turning their passion into a career.

In the summer of 2011, the camp began work on its most ambitious project to date: a multi-summer endeavor to beautify the train underpass that connects two sections of the park. The colorful tile mosaic, entitled Trains through Time, illustrates the history of the Montclare/Galewood neighborhood. The mosaic begins on the northeast side of the tunnel, where the teens created a scene that recalls the area’s early prairie lands. A giant buffalo roams fields of golden-hued grasses, and a small log cabin sits near the horizon. The back end of a caboose peeks out from the edge of the underpass, playfully alluding to the train, which was a vital source of transportation. Future expansions of the mural will depict the transformation of the neighborhood from farmland to residential town.