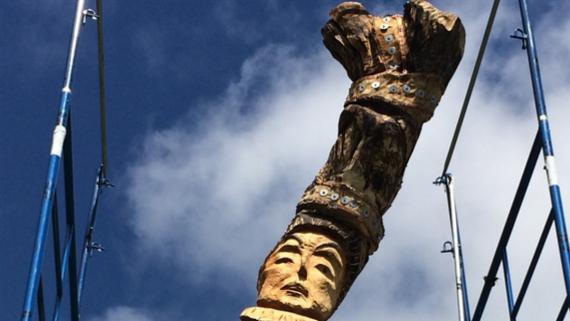 The Chicago Tree Project (CTP) is a collaborative initiative between the Chicago Park District and Chicago Sculpture International. The CTP is an annual citywide effort to transform sick and dying trees into vibrant public art rather than cutting them down. Using art as a vessel for public engagement, sculptors transform trees into fun and whimsical experiences for the greater Chicago community. Each year, twelve new trees are installed throughout the city. A complete map and more information can be found at www.chicagotreeproject.org

Artist's Statement: Knight and queen chess pieces in a checkmate position are carved from two twenty-foot tall ash trunks that leaned towards each other at the corner of Belmont and Lake Shore Drive in Lincoln Park. The knight is checking the queen as if on a chessboard, but the queen is eloquently gesturing that she has the last move. The knight began with the concept of War Horse, then took on a Guernica ferocity as it writhes up and out of its chess piece. The queen has two stacked and toppling crowns above the stately profile and dress of Queen Elizabeth. With a touch of humor, she has the frontal face of the Queen of Hearts from Alice in Wonderland. Both chess pieces indicate they are in a fierce moment of battle with raised hoof and stiletto heal compounding their steely gazes. The apartment dwellers were taken into consideration with the composition directed to above. I invite the viewer to interpret the interaction with their own experiences.