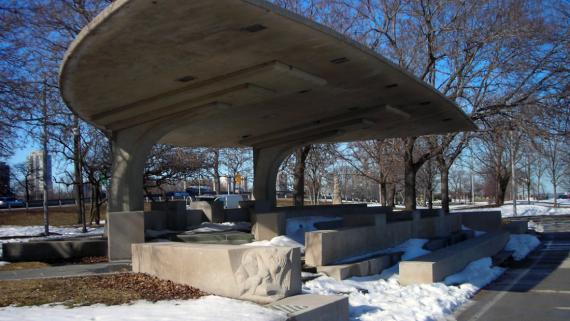 Constructed in 1957, Lincoln Park’s open air Chess Pavilion is both an architectural and sculptural work of art. Laurens Hammond, Chairman of the Board of the Hammond Organ Company, donated $90,000 toward the construction of the pavilion. As North Avenue Beach had been a popular summer gathering place for chess players since the 1930s, it was an obvious choice for the location of the pavilion.

Architect Maurice Webster designed the modernistic structure of concrete and Indiana limestone. Many of the chess boards are sheltered by a wing-like overhang. The Chess Pavilion has bas-relief components, incised carvings, and three-dimensional sculptural elements that were created by Boris Gilbertson (1907–1982).

Born and raised in Evanston, Illinois, Gilbertson began his studies in physics at the University of Chicago. But, after seeing workers unload an ancient carved artifact from a crate at the university’s Oriental Institute, he decided he wanted to become an artist, and soon enrolled at the School Art Institute of Chicago. During the Depression, Gilbertson was employed as a New Deal artist through the US Treasury Relief Art Project. For the last twenty-two years of his life, he lived and worked in Santa Fe, New Mexico. In addition to sculptures made of stone and metal, Gilbertson produced jewelry and Chinese brush paintings. His work can be seen at the Central Corridor of the US Department of the Interior, the Fond du Lac US Post Office, and in the permanent collections of the Smithsonian Institution.

For Lincoln Park’s Chess Pavilion, Gilbertson created the original game boards, a wall of incised carvings representing all of the different pieces in chess, bas-relief carvings of the bishop and the knight, and five-foot-tall, freestanding king and queen chess pieces. In 1957, the Chess Pavilion received a Citation of Merit from the Chicago Chapter of the American Institute of Architects at its Civic Pride luncheon.