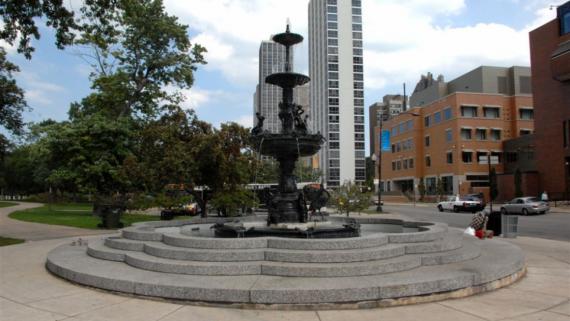 Jane Byrne (b. 1934), Chicago’s first female mayor, dedicated this fountain to the city’s children in 1982. Mayor Byrne played an active role in the ornamental fountain's creation, even selecting some of its sculptural elements. These include figures of playful children, musical instruments, and arching cranes in four tiers above a scallop-shaped lower basin made of granite. The fountain was created by the Robinson Iron Corporation of Alexander City, Alabama. Mayor Byrne dedicated the Chicago Children’s Fountain in its original location on Upper Wacker Drive west of N. Michigan Avenue.

First founded in 1946, the Robinson Iron Corporation purchased nineteenth century molds and pattern books from earlier manufacturers of fountains and other amenities such as the J.L. Mott Company. Robinson creates many of its fountains by using the old Victorian era molds in entirely new combinations. For this project, Robinson Iron cast two hundred and fifty small pieces which were assembled on site at the sculpture’s original Upper Wacker Drive location in the early 1980s. When the Wacker Drive reconstruction project began in 2001, the fountain was dismantled and stored under the Roosevelt Bridge for several years. The Chicago Department of Transportation and the Chicago Park District worked together to restore the fountain and reinstall it in a new location near the Chicago History Museum in 2005. Robinson Iron conducted the conservation work using the original plans and molds. This included recasting the damaged and missing pieces in its Alabama studios.