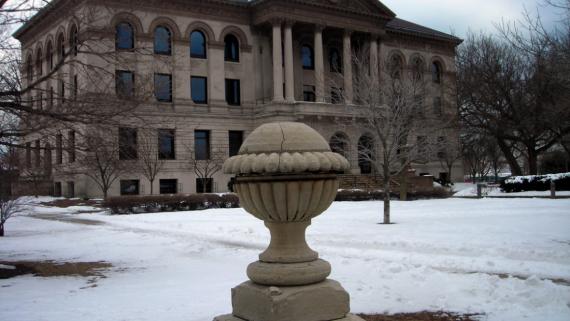 Installed in Lincoln Park sometime before 1901, this limestone finial survived the Chicago Fire of 1871. A whole series of such finials once lined the upper parapet of Chicago's City Hall and County Court House Building, a structure that was first constructed in 1853. The finials were part of a late 1860s addition designed by architects Jenney & Loring. Although the walls of the “fireproof” wings were still standing after the Great Fire of 1871, the building's interior was entirely destroyed.

Since the time of the Great Fire, the City Hall and County Building has been replaced twice. (The firm of Holabird & Root designed the existing building at 121 North LaSalle Avenue—which was completed in 1911.) Today, a matching surviving finial can be found at Wilder Park in Elmhurst, and other adornments of the old City Hall and County Court House rooftop can be found near the Charles Dawes House in Evanston, IL.