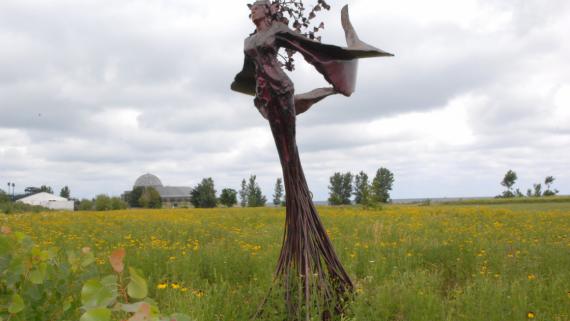 First located in Grant Park, Daphne Garden was one of twenty-four Art in the Garden installations in Chicago’s parks in 2004. The Union League Club of Chicago sponsored the Art in the Gardens temporary exhibit. In this program, artists were asked to integrate plant material into their installations to create constantly changing displays. Daphne Garden was originally installed at the northeast corner of E. Roosevelt Road and S. Michigan Avenue. Artist Dessa Kirk created the artwork that features three female figures entwined with lush flowers and plants. Chicagoans and visitors had such positive reactions to Daphne Garden that the Chicago park District decided to move the installation to Northerly Island in 2006.

Anchorage, Alaska native Dessa Kirk (b. 1974), came to Chicago in 1992 to attend the School of the Art Institute. After finishing her degree, she settled in Chicago and worked out of her Chicago studio for several years. Today she is primarily focusing on producing custom-made surf boards.

For Daphne Garden project, Greek mythology served as the inspiration. In an ancient myth, the nymph Daphne was pursued by Apollo, the archer god. To protect her from Apollo's advances, Daphne’s father turned her into a laurel tree. By highlighting Daphne, Kirk wanted to explore the theme of the exploitation of women. The three figurative Daphne Garden sculptures are made of welded automobile parts. Kirk's decision to use dismantled car parts is based in her interpretion of older Cadillacs as a symbol of materialism and self-destruction. The wing-like arms of the figures emulate leaves, with vines serving as skirts of the three women. These natural elements reinforce the imagery of the mythological Daphne transforming into a tree.

After the Art in the Garden exhibition, Kirk made a similar sculpture of a female figure known as Magdalene for a new location in Grant Park. It resides near Congress Parkway, just east of Michigan Avenue. She also created Red Lilies for the Artists and Automobiles installation in Grant Park.