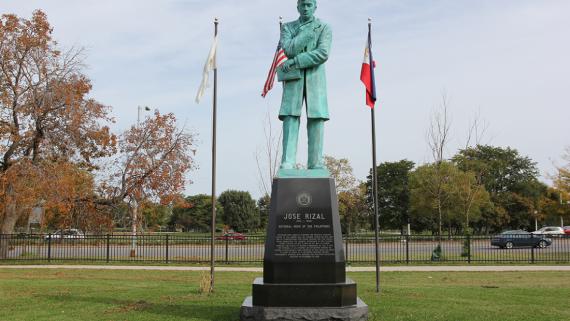 This monument commemorating the 100th anniversary of Philippine independence honors Dr. José Rizal (1861–1896), a revolutionary martyr and Philippine hero from the Spanish Colonial period. Rizal was a writer, doctor, farmer, artist, and activist whose military trial and execution are often considered the catalyst of the Philippine Revolution against Spain and the United States.

In 1994, local members of the Order of the Knights of Rizal and Ladies of Rizal began a campaign to install the José Rizal Monument in Lincoln Park. The Philippine Centennial Commission, with the support of many Chicagoans of Filipino heritage, raised enough money to recast a monument that stands at the Rizal Shrine at Dapitan, in Zamboanga Mindanao, Philippines. Antonio “Lito” Mondejar created both the original fiberglass monument and the bronze replica for Chicago. A parade was held for the sculpture’s unveiling in 1999.