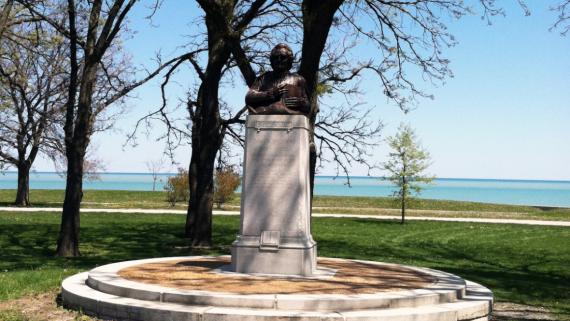 Scientist, philosopher and theologian Emanuel Swedenborg (1688–1772) devoted his life to exploring the relationship between the physical and spiritual worlds. He emphasized the importance of religious tolerance and advocated living in a useful way to achieve a more spiritual existence. After having his own spiritual awakening, Swedenborg wrote dozens of theological publications that later influenced the formation of a branch of Christianity known as the New Church, or the Church of the New Jerusalem. Swedenborg’s teachings have inspired generations of talented and accomplished individuals including Helen Keller, Ralph Waldo Emerson, Elizabeth Barrett Browning, Carl Gustav Jung, and Daniel H. Burnham.

In the early 1920s, a woman physician, Dr. Minnie Ridgeway Bishop, and her husband, Louis Brackett Bishop, members of Chicago’s Church of the New Jerusalem, offered to donate a bronze bust of Swedenborg for placement in Lincoln Park. Swedish sculptor Adolf Jonnson (1872–1945) produced the Emanuel Swedenborg Monument. According to the proceedings of the Lincoln Park Commissioners, Jonnson spent five years creating the sculpture, relying on studies of Swedenborg’s skull by Professor W. Hultzeranz in Upsala, a portrait in the Castle of Gripsholm, as well as a painting in the Nordiska Museum in Stockholm.

When the Lincoln Park Commissioners agreed to accept the gift of the bronze bust, the Bishops offered to pay the cost of an appropriate granite base for the sculpture. But instead, a group of Swedish Americans formed a committee to raise the necessary funds. The Bishops and the committee offered the monument as an expression of their appreciation to Swedenborg for his “genius and contribution to science and humanity.” Held on July 24, 1924, the dedication ceremony included speeches by Swedish dignitaries, a reading of a letter from President Calvin Coolidge, the recitation of Edwin Markham’s poem “Swedenborg,” and remarks by Alex Wallenberg, Swedish Minister to the United States.

In 1938, to honor of the 250th anniversary of Swedenborg’s birth, the monument was rededicated and the granite base was engraved with quote by President Franklin Delano Roosevelt. The bronze bust remained on its granite setting until 1976, when it was stolen. At that time, the Chicago Tribune reported that the police were baffled by the theft. When it became apparent that the original bust would not be recovered, the Chicago Park District installed a pyramidal form on top of the granite base, creating a modified memorial.

In recent years, a series of serendipitous events led to the recasting of Swedenborg’s missing bust. In 2006, Ed Gyllenhaal, curator of the Glencairn Museum in Bryn Athen, Pennsylvania, posted archival photographs of Chicago’s Emanuel Swedenborg Monument on an on-line New Church history blog. Two years later, Eva Bjorkstrom of the New Church of Stockholm, contacted Gyllenhaal to inform him that her church owned the original plaster model of Chicago’s Swedenborg bust.

In 2009, the existing granite monument was seriously damaged as the result of an automobile accident. Because significant repairs were need for the granite base, Chicago Park District officials decided to fully restore the original monument. Although they had anticipated that the bust would have to be made based only on photographs, Gyllenhaal provided information about the existence of the monument’s plaster model. The Chicago Park District hired Swedish sculptor Magnus Persson to repair the original model and to recast it in bronze. At the end of the project the New Church of Stockholm donated the plaster model to the Glencairn Museum. The Chicago Park District completed the repairs to the base and installed the newly cast bronze bust in 2012.