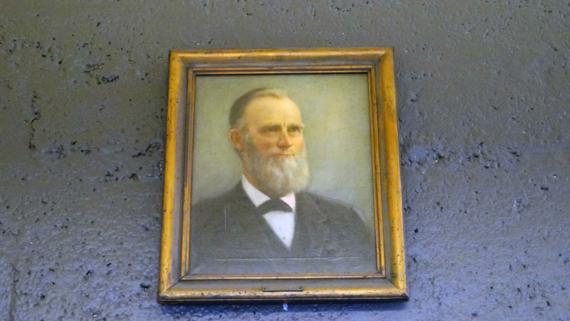 In 1909, Judge John Barton Payne (1855–1935), a member of South Park Board of Commissioners, established a fund for artworks depicting “statesmen, historical personages and colonial day events and scenes” to “adorn the walls” of the field houses within the system. Within the next several years, the Payne Art Fund commissioned several paintings of historical figures associated with various parks, including this portrait of Ezra Cornell.

The cousin of Paul Cornell, for whom the small park was named, Ezra Cornell (1807–1874) was an important American businessman and philanthropist. Born into a Quaker family in New York, Cornell became the manager of a flour and plaster mill in 1828. In the early 1840s, he became involved with a group of businessmen, including Samuel Morse, who were laying an experimental telegraph line from Baltimore, Maryland, to Washington, D.C. Cornell invented a machine that could dig a trench and lay cable in a single operation. He continued in the telegraph industry for many years, and along with several other leaders in this field, he founded Western Union Telegraph Company in 1855. During this period, Cornell was involved in many civic and educational efforts. He established a model farm near Ithaca, New York, donated funds for a public library, served in the state legislature, and was the principal founder of Cornell University, which opened in 1868.