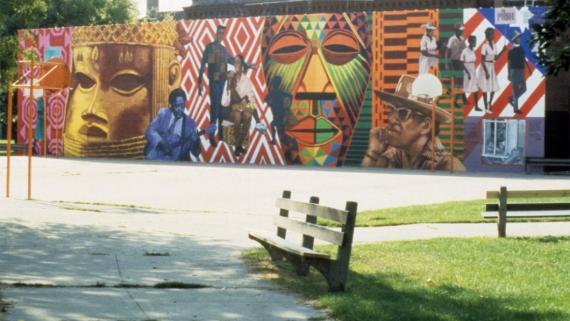 Entitled Feed Your Child the Truth, this vivid mural, created by a group of local youth under the direction of lead artist Bernard Williams, commemorates the life of Jessie “Ma” Houston (1899–1980). Houston is most recognized as an advocate for neglected and underserved prison inmates. She was also an avid supporter of Operation PUSH (now the Rainbow/PUSH coalition), a multi-racial, multi-issue organization founded to protect, defend, and gain several civil rights by lobbying for equal educational and economic opportunities. It is fitting, then, that this graphic tribute is located in the park across the street from the group’s headquarters. In the early stages of planning the mural, Williams invited community members to give input on design. Several of Houston’s relatives provided insight into this extraordinary woman’s life. Houston’s daughter, Helen Sinclair, greatly contributed to the mural by offering a compelling oral history of her mother and providing photographs from Operation PUSH.

Several details from Houston’s life are presented in the mural. On the right, a golden-hued portrait of Houston depicts her determined gaze. Her hat is adorned with buttons bearing messages such as “Freedom Day” and “Now is the time to open the door to all of God’s Children.” Above her, civil rights demonstrators march for equality; below, an African American man behind bars warns neighborhood youth of the consequences of illegal behavior. The image of the jailed man alludes to Houston’s strong commitment to inmates, whom she often visited and encouraged. This depiction also proved especially controversial; Williams remembers that while painting it various passersby deemed it a negative representation of blacks in America. The artist’s hope, however, was that it would serve as an honest portrayal of the current sociopolitical climate, tying in with the overall title of the mural, Feed Your Child the Truth.

Chicago artist Bernard Williams (born 1964) has been active in the local arts community for nearly twenty years. He taught at the School of the Art Institute of Chicago from 1991 to 2003, and he produced many large-scale outdoor murals in Chicago and in other cities. Feed Your Child the Truth is one of Williams’s early works. The mural was created shortly after he finished the restoration of Calvin Jones and Mitchell Caton’s iconic Bronzeville mural Another Time’s Voice Remembers My Passion’s Humanity (1979).

Caton and Jones were influential members of Chicago’s African American mural movement of the 1960s and 1970s. Caton had an especially powerful impact on Williams; the elder muralist encouraged Williams to move away from traditional European modes of mural making in favor of incorporating African motifs in a collage-like format. This influence is easily discerned in Feed Your Child the Truth, which features various African patterns and symbols, including a large gold commemorative head that honors a Nigerian oba (king). The mural also depicts uniquely American details such as a large portrait of guitarist Johnny Shines, who was part of the Chicago Blues scene. Thus, by bringing together African and American themes, Williams has created a mural that both speaks to the history of the neighborhood and gives voice to the community.

Feed Your Child the Truth | Artwork

Feed Your Child the Truth | Artwork