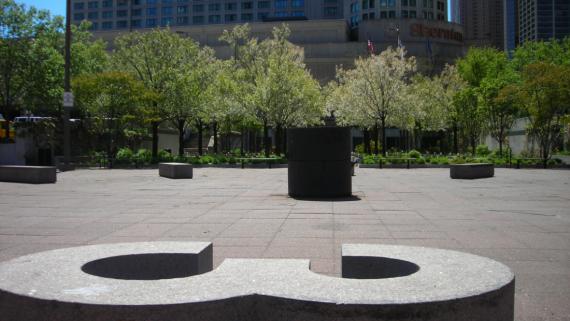 Brooklyn based artist Vito Acconci (b. 1940) has worked as a sculptor, poet, landscape designer, and performance artist. He designed Floor Clock II in 1989 for Sculpture Chicago, a local non-profit organization that no longer exists. Sculpture Chicago commissioned Acconci to create the sculpture for a temporary exhibition in the Equitable Building Plaza. He created the giant clock to encourage viewers to sit on its numbers, allowing the minute hand to interact with viewers as it passed along the face of the clock.

In 1992, Floor Clock II was moved to its current location in the Ogden Plaza Park. This large once highly-interactive sculpture provides a focal point for the plaza; however, the moving hands have been missing for several years.

As Acconci started making sculptures relating to architecture in the late 1970s, he became well-known for his community participation-based installations. He has received attention for his sculpture, poetry, performance art, and architectural and landscape installations. Acconci has produced works for college campuses, airports in Philadelphia and San Francisco, and public places across the United States and in several other countries, including the Netherlands and Austria.