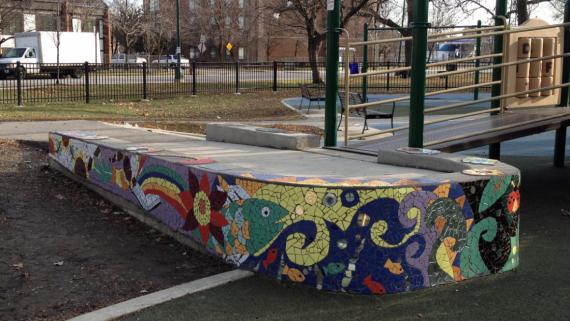 In the summer of 2007, the Chicago Park District and the Garfield Park Conservatory Alliance worked together to renovate the playground at Homan Avenue and Lake Street on the northeast border of Garfield Park. Improvements included new playground equipment with increased accessibility for children of all ages and abilities.

Once the equipment was installed, artists Mirtes Zwierzynski and Max Sansing worked with twenty students in the After School Matters program to create complementary tile mosaics. The project took eight weeks to complete, and the resulting mosaics decorate and enliven the playground.

This colorful, broken-tile mosaic wraps around the base of the access ramp to the playground equipment. The composition features a young girl who is reading. Several motifs sprout from her open book, including two bright ribbons—depicting the words friendship and learning—that fold over the top of the ramp. A brilliant rainbow also emerges from the book’s pages. Culminating in a giant flower, the rainbow symbolizes the world of imagination made possible through books. Other fantastical images include an underwater scene with fish of all sizes and playful, multi-colored waves.

On the north side of the ramp, animals such as a monkey, butterfly, and bumble bee add a cheerful tone to the mosaic. The monkey holds one of several children’s building blocks depicting the letters A, B, C, and D. The blocks portray the foundation of learning, once again signaling the importance of reading and representing the overall theme of the mosaic.