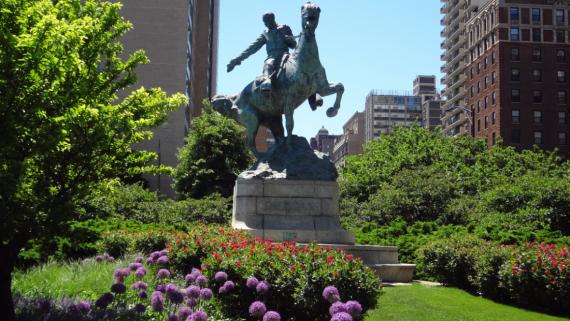 After ascending rapidly through the ranks of the Union Army, Philip Henry Sheridan (1831–1888) became a celebrated Civil War General most famous for leading the campaign to defeat Confederate troops in the Shenandoah Valley. Locally, Sheridan was especially admired for maintaining law and order during the Great Fire of 1871. As commander of the army headquarters in Chicago at that time, Sheridan proactively bombed buildings to prevent flames from spreading along the South Side. To commemorate his contributions to the city, Chicagoans formed the Philip Sheridan Monument Association.

The group commissioned Gutzon Borglum (whose full name was John Gutzon de la Mothe Borglum), sculptor of an earlier Sheridan Monument in Washington D.C., and the John Peter Altgeld Monument in Chicago. An American artist who trained in Paris, Borglum (1867–1941) became friends with and influenced by acclaimed sculptor Auguste Rodin (1840–1917). Borglum wanted to create a distinctly American expression in art and he was also fascinated with the idea of sculpting extremely large works. He produced an enormous carving of Confederate leader Robert E. Lee’s head at Stone Mountain in Georgia. Borglum went on to create his crowning achievement, the Presidential Memorial at Mount Rushmore in South Dakota.

For both of the Sheridan Monument in Washington D.C. and the one in Chicago, Borglum depicted General Sheridan on his horse rallying against the suprise Confederate attack of October 19, 1864. Sheridan had to quickly ride his horse "Rienzi," from the town of Winchester, Virginia to a battlefied twelve miles away, where he led his troops in a counterattack. This important victory prompted Sheridan to rename his horse "Winchester."

Sculptors often follow a formula for equestrian statues—if the horse has one leg raised, it means the rider was wounded; if two legs are raised, the rider died in battle; if all four legs are on the ground, the rider escaped unscathed. Borglum, however, dismissed this convention for his Philip Sheridan Monument in Chicago. The sculpture depicts Sheridan's horse with one leg raised. As Sheridan did not suffer battle wounds, this is one of the few equestrian war hero sculptures in the city that does not adhere to this visual system.