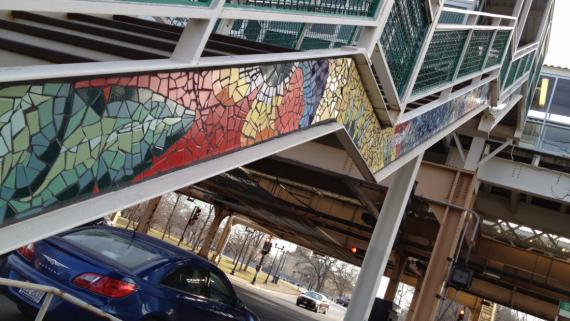 In 2001, the Chicago Transit Authority unveiled a brand new Green Line ‘L’ station at Central Park Drive and Lake Street. The station, which replaced the defunct Lake/Homan stop, was intended to provide better access to the newly renovated Garfield Park Conservatory. As part of the Adopt-a-Station program, the Garfield Park Conservatory Alliance worked with the Chicago Public Art Group on a multiyear student project to create and install a series of broken-tile mosaics on the station’s concrete infrastructure. The colorful mosaics depict the recreational activities of the park as well as the flora, fauna, and art found in the conservatory.

The project took place in several stages. In 2001, artists Michael Cloud and Salim Hurtado mentored a group of fourteen West Side youths. The six-week program was held at the conservatory, where the students learned the fundamentals of mosaic composition, conceived designs, and created the mosaics. The panels were installed around the foundation of one of the station’s two elevator towers, and six smaller individual mosaics were placed on the bases of the pylons supporting the ‘L’ platform.
In 2002, artist Carolyn Elaine and assistant Ingrid Swenson led eleven teens on a second phase of the project. Entitled The Chihuly Remix, these mosaics portray floral imagery inspired by the blown-glass creations of renowned artist Dale Chihuly, whose work was displayed at the conservatory in 2001 and 2002. The panels were used to decorate the foundation of the other elevator tower, as well as twelve more panels along pylon bases.

The following summer, Elaine and assistant Moses Ball worked with a group of twelve teens to create the mosaics that line the outside of the ‘L’ stairwells. The students developed their designs after viewing the works from Zimbabwe’s Chapungu Sculpture Garden, which were on display at the conservatory and the Chicago Botanic Garden at that time. The teens also had the opportunity to personally interact with some of the African sculptors, who shared stories and ideas with them. In 2004, Nina Smoot-Cain led the final phase of the project, completing the four-year effort to beautify the Lake/Homan ‘L’ station. Visible to pedestrians, motorists, and bikers alike, the mosaics heighten our appreciation of the train stop, the conservatory, and the community in general.