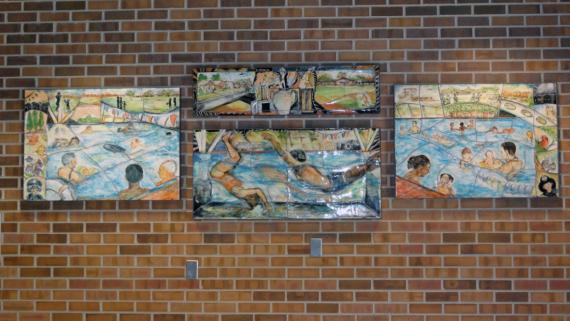 The Hayes Park natatorium, which opened as an addition to the field house in 2004, has become a vital part of the Ashburn-Wrightwood community. To celebrate the spirit of the neighborhood and the renewed interest in athletics, Chicago artist Laurie Shaman created In the Swim, a series of six ceramic tile panels. Commissioned by the City of Chicago's Public Art Program, these expressionistic, hand-painted works are installed in various places in the facility.

In the main entryway, visitors are greeted by four horizontal panels, the uppermost of which, entitled Trophy, situates Hayes Park within the city of Chicago. The two side panels—Children and Adults—show the diverse group of people that the pool serves, surrounded by representations of local wildlife and plants found in the park. Playful details also pay tribute to Chicago fire fighters and policemen, who often train at the facility. At center, the Acrobatic panel illustrates the exuberant athleticism of two pool-goers.

Down the hall, the panel "To the Pool" depicts the graceful extension of a swimmer, whose outstretched hands direct visitors to the natatorium. Nearby, the final panel, The Circle, is a reminder of the essential role that water plays, not only as a life force for all creatures but also as a means of social interaction, exercise, and activity.

Laurie Shaman has been an active member of the local ceramics scene for many years, serving the community as the director of Lill Street Gallery and as a museum educator at the Art Institute of Chicago. She creates her ceramic tile panels using a slab-built technique, in which earthenware clay is rolled out, cut into individual tiles, and fired. Shaman then begins the painting process, applying color freehand using brushes, sponges, and bottles of stain with penlike tips. Her lyrical style incorporates combinations of figures, landscapes, and architectural elements, as demonstrated by the eclectic motifs exemplified by In the Swim.

Hayes In the Swim | Artwork

Hayes In the Swim | Artwork

Gallery:
Hayes Park: In the Swim
Date Posted: 7/23/2015 In the Swimhas several ceramic panels including this one that serves as a directional sign leading…
Advertisement