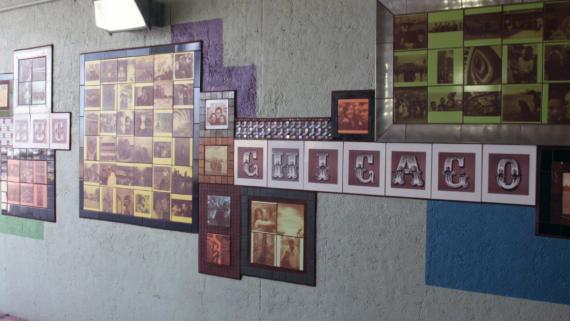 44th Ward Alderman Tom Tunney, Choose Chicago, and the Chicago Cubs teamed up to sponsor the Hug Chicago Mural. Produced by the Chicago Public Art Group with Julia Sowles-Barlow as lead artist, the ceramic tile mural stretches across the Barry Avenue pedestrian underpass. The mural highlights Chicago's diversity. It incorporates photographs that were solicited through a social media campaign sponsored by Hug Chicago, a non-profit organization founded in 2012 to involve citizens in making improvements to the city. Chicagoans were asked to take pictures of themselves hugging their friends and family at their favorite places and landmarks throughout the city. HUG Chicago is a program of Hospitality Cares Chicago (HCC), a non-profit partnership between the Chicago Convention and Tourism Bureau and the city's tourism and hospitality organizations.