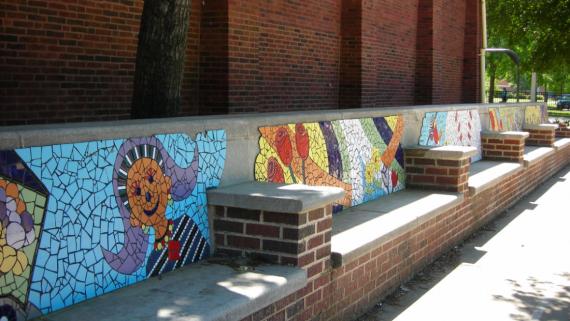 Exterior benches on the north side of field house

In 1997, former Mayor Richard M. Daley announced a sweeping redevelopment plan for Division Street on Chicago’s Near North Side. The ten-year plan included razing the city’s Cabrini Green housing projects to make room for shopping centers, apartments, and a new branch of the Chicago Public Library. The transformation also involved a $3.2 million renovation of nearby Seward Park. Completed in 1999, the improved park features new planting and playground equipment. A new clock tower and fountain further enhance the grounds. Improvements and expansions were also made to the field house, including the addition of concrete-and-brick benches on either side of the building’s north entrance.

These colorful, broken-tile mosaics were created to decorate the benches. The project sponsors—Chicago Park District, Chicago Public Art Group, and North Town Arts Corporation—selected artist Carolyn Elaine to lead a team of students from various North Town community schools. Elaine held two, ten-week workshops, during which the children designed the mosaics. The compositions were then installed along the bench backs.

I Saw Something Silly in the Park Today captures the whimsical spirit of the reinvigorated park. The children were encouraged to let their imaginations run wild in their designs. They dreamed up a wide variety of motifs, including animals, insects, flowers, food, sports, and children playing. Unexpected interactions occur: on the benches to the left, a long snake playfully reaches its tongue toward a hamburger. To the right, two girls appear dressed in brightly striped clothing. One of the girls has vivid purple hair; the other swings upside down joyfully from a playground bar. More details, such as a rocket ship, a carton of French fries, and a cat are portrayed floating throughout the composition. Their spontaneous arrangement suggests that you never know what you might find in the park if you use your imagination.